In yesterday's Biblical battle, Photini defeated Tabitha 58% to 42%, setting up an intriguing Elate Eight matchup with Martha of Bethany.

Today it's Canadian vs. Indian as Marguerite d'Youville faces Pandita Ramabai. You'll recall that Pandita made it this far by barely sneaking past Damien of Molokai in the closest ever Lent Madness vote, while Marguerite upset(?) Phillips Brooks. 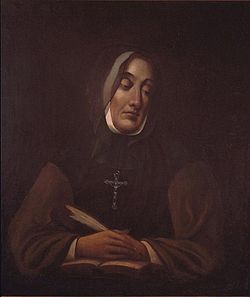 This quote attributed to Marguerite, “All the wealth in the world cannot be compared with the happiness of living together happily united,” reminds us that being happily united in service to Jesus rarely reads like a comforting fairy tale and is rarely without unsettling aspects. Marguerite’s life exemplifies that. Her union with her husband was tragic on several levels, from his rampant drinking and gambling to four of six children dying in infancy. In the aftermath of the death of her husband, Marguerite, a young widow with no income and two small children, writes of hearing these words from her priest in her despair, “Console yourself, Madame, God has destined you for great works, and you will rebuild a crumbling house.”

She did rebuild the crumbling house of her life. She soon joined with two other women to form an order eventually known as The Grey Nuns. They sought to care for the sick, the poor, and the outcast – whoever needed care, companionship, and comfort. One of the vows they made was to receive, feed, and shelter as many poor as they can take care of.

But her house would crumble again with a fire that completely destroyed the sisters’ original dwelling. In the aftermath, Marguerite said to her fellow nuns, “We have until now lived a little too comfortably; henceforth, we shall have more in common with the poor by living more like them.”

Instead of rebuilding their chapter house, Marguerite, who was as ingenious and inspired as she was devout, soon rebuilt a crumbling hospital. This “Mother of the Poor,” as she was known, rebuilt the building and the hospital ministry. This rebuilding, however, was not solely due to Marguerite’s labor. We would be remiss to ignore that Marguerite was one of Montreal’s more prominent owners of enslaved people, including People of Color, Indigenous Peoples, and British prisoners. Saints are not perfect, and our telling of them should not be edited.

The hospital, too, burned to the ground some years after its founding. As Marguerite began the enormous task of rebuilding, she wrote to a friend, “My dear Father, pray that God will give me the strength to bear all these crosses and to make saintly use of them. So much at one time: to lose one’s king, one’s country, one’s possessions.” She worked tirelessly, often so exhausted from her ministry she had to be carried home via a wheelbarrow.

She and the Grey Nuns did rebuild, and their mission continues. During their early years, people in Montreal were often heard saying, “Go to the Grey Nuns; they never refuse anything.” For that part of Marguerite’s legacy, we pray that our lives, too, will be lives of service and love. 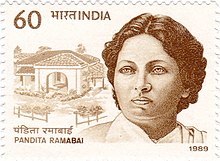 Born in 1858 to a family of Hindu scholars, Pandita Ramabai was no stranger to loss. Her parents and sister died in a famine when she was a teenager, but not before her father had broken societal rules to teach her and her mother Sanskrit. She went to university with her surviving brother and because of her knowledge of the sacred texts was granted the titles Pandita (a wise person) and Sarasvati (a goddess of learning).

Perhaps due to her radical upbringing, she was committed to social reform. With her brother, she advocated for women’s education and the ability for women to be independent in society, rather than reliant upon male family members. She once took the podium to give a speech on gender reform and waited for absolute silence before speaking. She began with the words, ‘It is not strange, my countrymen, that my voice is small, for you have never given a woman the chance to make her voice strong!” Unsurprisingly, the resolution she advocated for won the vote.

After being widowed at a young age, Pandita Ramabai traveled to the UK and then America. There she raised funds for residential schools where widows could learn skills to be independent. Written at this time, her book The High Caste Hindu Woman critiqued the patriarchy of her caste, the Brahmins. It was in England that she converted from Hinduism to Christianity, for which she was harshly critiqued by the Brahmin community.

I realized after reading the fourth chapter of St. John's Gospel, that Christ was truly the Divine Saviour he claimed to be, and no one but He could transform and uplift the downtrodden women of India...Thus my heart was drawn to the religion of Christ. -Pandita Ramabai

While abroad from India, she also studied how western educational and philanthropic institutions worked, which enabled her to start Sharada Sadan (or Home for Learning) in Mumbai in 1889. There, women received formal academic education and vocational training. In the same year, after a famine hit Mumbai, she founded Mukti Mission, which still runs to this day. For more than a hundred years women at the Mission have been taught skills they need to be self-reliant and were forbidden to learn: carpentry, tailoring, and farming to name a few. Perhaps most radically, they were also taught about their own bodies.

People must not only hear about the kingdom of GOD, but must see it in actual operation, on a small scale perhaps and in imperfect form, but a real demonstration nevertheless. -Pandita Ramabai

Feminist scholars argue that, as a woman and a Christian, Pandita Ramabai’s contributions to scholarship and society were erased from mainstream Indian history, but what cannot be erased are the effects of her vision on the lives of generations of women and girls.