After a rousing first day of Lent Madness 2020, in which Thomas More routed James the Less 68% to 32% amid heavy voting (over 10,000 votes cast), we're on to day two. And we've established, once and for all, that less is not more. At least in this year's edition of the Saintly Smackdown.

Today, you're invited to gird your loins for a battle of Biblical proportions as two Scriptural saints face off. Now, you may be aware that this year's bracket features a quartet of Elizabeths, one in each quadrant: The Biblical Elizabeth, Elizabeth of Hungary, Elizabeth the New Martyr, and Elizabeth Frye. Will the four Elizabeths make up the Faithful Four? Only time and your votes will tell (though the oddsmakers in Vegas are dubious).

Today we encounter the first of the four Elizabeths, she of the Bible, who takes on Andrew the apostle.

But before you read, reflect, and vote (hopefully in that order), we wanted to share an article about Lent Madness that appeared in the San Diego Union Tribune. Partly because it's a nice article about this little devotion of ours, but mostly because we like cities named for saints.

Also, note that tomorrow is the ONLY non-weekday vote of Lent Madness. Margery Kempe will square off against Eustace. So don't forget to head over here to make your pick.

Okay, enough blathering on. Time to see whether Elizabeth or Andrew will be cast out of Lent Madness 2020!

Andrew was Simon Peter’s brother. When they were young, they learned to fish on the Sea of Galilee. They spent stormy afternoons together, watching the brooding clouds form and then wrestling the battering waves. They breathed in the calm days, floating on the gentle rhythm of the sea, staring into the horizon, talking about life, God, and meaning.

Sometimes Andrew and Peter fished late into the night. Under those glimmering stars, they must have looked at where the sky and sea met and wondered if there was something else for them, something more than nets and scales.

For many people, it would have been difficult to have Peter as a brother. Peter’s tongue spoke every word on his mind and his body followed every impulse. Living with Peter’s passion would have been overwhelming. Even as the authors compiled the gospel stories, the focus always seemed to gravitate toward Peter. Yet, Andrew didn’t seem to mind Peter’s big personality. When Jesus invited Andrew and Peter to follow him, Andrew didn’t hug Peter goodbye and wish him well on his adventure. Instead, Andrew dropped his nets and said farewell to the boats.

We get a glimpse of Andrew’s humility when we first meet him in the gospels, and that humble attitude marks Andrew to his death. Not only did Andrew follow Jesus, listening to his teaching, watching as he multiplied the loaves and fishes, and sharing the Last Supper with him, but after Jesus’ death, resurrection and ascension, Andrew went on to preach in Thrace, Scythia, and Achaea. His journeys took him along the Black Sea and the Dnieper River.

In Achaea, Andrew was martyred. He refused to be nailed to a cross as Jesus was. Just as John the Baptist didn’t feel worthy enough to tie Jesus’ sandals and Peter couldn’t bear to have Jesus wash his feet, Andrew couldn’t imagine being executed on the same instrument of death. Instead, Andrew was tied to an X-shaped cross, which is now commonly known as a “Saint Andrew’s Cross.” Andrew became the patron saint of Scotland, Ukraine, Romania, and Russia.

Collect for Andrew
Almighty God, who gave such grace to your apostle Andrew that he readily obeyed the call of your Son Jesus Christ, and brought his brother with him: Give unto us, who are called by your Word, grace to follow him without delay, and to bring those near to us into his gracious presence; who lives and reigns with you and the Holy Spirit, one God, now and for ever. Amen. 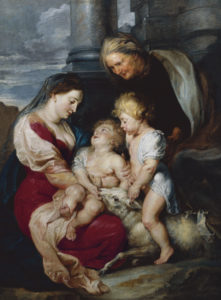 Elizabeth of the Bible has her story told mostly in the Gospel of Luke. She was the mother of John the Baptist, and a relation of some kind — most likely a cousin — to Mary, the mother of Jesus.

The name Elizabeth literally means “God has sworn,” an idea that was prominent in Elizabeth’s life. When we meet her in Luke’s Gospel, she is already married to Zechariah, a high priest in the temple. Tradition holds that Elizabeth, too, would have been a member of the priestly class.

When Zechariah fails to believe the word of the angel who announces the birth of John, the angel, in a fit of holy pique, strikes him mute until he can shape up. Luckily, Elizabeth is there to rescue her erstwhile husband, name her son John, and restore his voice to him. Although Elizabeth doesn’t even receive a visit from the angel, she believes enough that she accepts the divine gift of her pregnancy and, in turn, passes the gift of acceptance onto her cousin.

When Mary, her unwed teenaged cousin, arrives on her doorstep, it is Elizabeth who provides Mary shelter and it is to Elizabeth that Mary sings the triumphant Magnificat. Elizabeth, notably, doesn’t ask Mary where the baby came from, or what is going on — Elizabeth simply welcomes her with open arms.

The writer of Luke doesn’t opine on what sort of mother Elizabeth was, or really, what sort of person she was, but between correcting her husband, sheltering an outlandish cousin, and raising John the Baptist, one can imagine she must have been quite the force.

The only other account we receive of Elizabeth is from one of the non-canonical gospels — the Infancy Gospel of James. It records the tradition of Elizabeth and baby John the Baptist fleeing from Herod’s genocidal soldiers. When Elizabeth cries out to the mountains for shelter, the mountain splits open and hides her and the baby.

It’s worth noting that Elizabeth is hailed as a holy figure by a wide range of faith traditions, groups as diverse as Islam to the Lutheran Church—Missouri Synod. Though we don’t have much concrete information about her, Elizabeth’s legacy of hospitality, courage, and compassion left a lasting impact.

Collect for Elizabeth
Almighty God, you have surrounded us with a great cloud of witnesses: Grant that we, encouraged by the good example of your servant Elizabeth, may persevere in running the race that is set before us, until at last we may with him attain to your eternal joy; through Jesus Christ, the pioneer and perfecter of our faith, who lives and reigns with you and the Holy Spirit, one God, for ever and ever. Amen.

222 comments on “Andrew vs. Elizabeth”