Welcome to the one and only Saturday matchup of Lent Madness 2020. From here on out every contest will take place exclusively on the weekdays of Lent. In a word, today is SPECIAL! And to mark this special occasion, Margery Kempe, a 14th century mystic, takes on Eustace, an early Christian soldier.

Yesterday, Elizabeth soundly defeated Andrew 63% to 37% in a battle of Biblical saints. We're still waiting for that first real nail-biter, but fear not! You're guaranteed to have a number of them before our work is done here.

By the way, if you need to check out the results from previous matchups or view the updated bracket, just head over to the bracket page. Our trusty Bracket Czar, Adam Thomas, updates the page every day, in his inimitable manner.

Now go enjoy your Saturday and don't forget to vote! 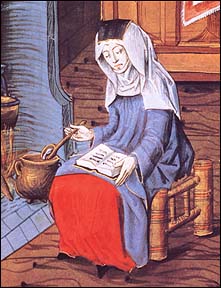 Margery was born into a prosperous family in about 1373, and at age twenty, she married John Kempe. She might have been like many other women of her time, known only through church records and occasional correspondence, except for The Book of Margery Kempe, the earliest surviving autobiographical writing in English that details her spiritual crisis, visions of Christ, and subsequent devotion to Jesus.

Margery herself could neither read nor write; she dictated her book to a priest in her later years. Margery’s book invites us into the life of a woman whose faith in God did not require her to edit herself but instead to offer her experience of God and her call as a disciple in unflinching, raw, humorous, and lovely glory.

Margery begins her book telling of her post-childbirth illness. She fasts and prays in response to horrific visions of demons. In this desperate state, Margery describes Jesus coming to her, saying to her she was not forsaken but loved. Margery devotes herself to Christ, eventually (after fourteen children) forcing her husband to honor her decision to live a life of chastity, calling on God to terrify her husband when he feels a desire to break this vow.

She is also imbued with the gift of tears, weeping and praying for hours in public and in private, especially when meditating upon the Passion of Christ. She begins a life of pilgrimage. She meets the Archbishop of Canterbury, is almost burned as a Lollard, visits with Julian of Norwich, and is arrested and examined as a heretic because she preached…as a woman. Margery travels alone to the Holy Land, Assisi, and Rome, walks the Santiago de Compostela, and engages in conversation with Christian mystics from all across Europe.

Margery did not dictate her book as a memoir or travel guide. She would likely not have considered her life experience alone worthy of recording. She instead recognized the profound, mystical, and even unsettling presence of God in her life and for that reason, sought to record the presence of the grace and mercy of God in her life so that God would be glorified. Her book is a wonderful testament to the grace of God in the extraordinary life of a woman who dared to be a disciple.

Collect for Margery Kempe
Direct our hearts, O Gracious God, and inspire our minds; that like your servant Margery Kempe, we might pass through the cloud of unknowing until we behold your glory face to face; in the Name of Jesus Christ our Lord; who with you and the Holy Spirit lives and reigns, one God, for ever and ever. Amen. 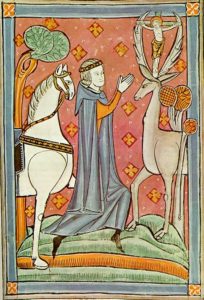 Strange things can happen when a person is out alone in the mountains, as shown by the legend of Saint Eustace. During the reign of the emperor Trajan, a Roman general named Placidas left his quarters to hunt. While in the countryside outside of Rome, Placidas came upon a stag moving in his direction. Between the stag’s antlers he saw a figure of Jesus Christ on the cross, and as the animal approached, he heard a voice calling him by name.

The vision changed him; Placidas immediately sought baptism into the church for himself and his family, moving from a general in the armies of Rome, which was persecuting Christians, to being numbered among the persecuted. At his baptism, Placidas changed his name to Eustachius—or in its anglicized form, Eustace. A series of catastrophes followed: Eustace lost all his wealth, and his servants soon died of a plague. As if those calamities were not enough, Eustace’s wife, Theopista, was kidnapped by the ship’s captain when on a voyage at sea. At a later point, when the family was crossing a river, his sons were taken away by a wolf and a lion. Yet Eustace remained faithful.

Eustace’s military acumen remained in high demand, and he was recalled to the Roman legions. Upon his recall, Eustace somehow managed to both reunite with his wife and children and play a part in a victory for Rome’s armies. Yet when the time came after the army’s victory to offer sacrifices to the Roman gods, Eustace refused. Legend holds that Eustace and his family were then martyred for the Christian faith, suffering death by roasting in a bronze statue of a bull.

Eustace is counted among the Fourteen Holy Helpers—fourteen saints venerated together in Roman Catholic tradition because their intercession against illness came to be believed as particularly effective in response to the Black Death. Among other things, Eustace is the patron saint of hunters, trappers, and those facing trouble; his intercession is invoked against family discord and against fire (as some sources clearly note, both temporal and eternal). He is also the patron saint of Madrid, Spain. Eustace is remembered in the West on September 20.

Collect for Eustace
Almighty God, who gave your servant Eustace boldness to confess the Name of our Savior Jesus Christ before the rulers of this world, and courage to die for this faith: Grant that we may always be ready to give a reason for the hope that is in us, and to suffer gladly for the sake of our Lord Jesus Christ; who lives and reigns with you and the Holy Spirit, one God, for ever and ever. Amen.

174 comments on “Margery Kempe vs. Eustace”