Albert the Great vs. Leo the Great

Today, it's the Battle of the Greats as Albert the Great squares off against Leo the Great to determine, once and for all, just who is the greatest? (with all due respect to Muhammad Ali, of course).

Over the weekend, in the only Saturday matchup of the season, Egeria saw her way past Tarcisius 61% to 39%. Don't forget you can click on the Bracket Tab to check past results and access the Matchup Calendar to see the upcoming pairings. Now go vote! 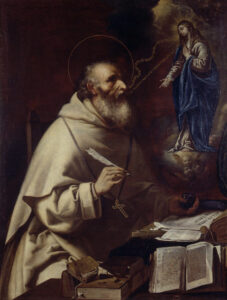 During the Middle Ages, there were few subject areas that Albert didn’t study, contribute to, or lead the way in.

Albert was born around the year 1193, somewhere in Bavaria to a wealthy German family. Albert was educated primarily at the University of Padua in northern Italy, where he began a lifelong interest in the writings of the great Greek philosopher Aristotle. Around this time, Albert reportedly was visited by the Virgin Mary, which convinced him to enter the Dominican Order.

He became a master of theology in 1245 and began to teach at the University of Paris, where the highly influential Thomas Aquinas was one of his students. Their relationship grew from teacher/student to friend and colleague. In 1254, Albert was elected prior for the Dominican Order German-speaking province, which kept him busy traveling and attending to the needs of the people. Six years later, he was named bishop of Regensburg, Bavaria, but resigned after three years. Again, his travels took him far, always on foot and never on horseback, thereby earning him the name “Boots the Bishop.”

His lasting influence is far-reaching and ubiquitous. His contributions can be found in all the major scientific fields, from alchemy to zoology. Among his innumerable contributions to the world of knowledge, he is credited as discovering arsenic. Also of significance are his writings about Aristotle.

Albert died November 15, 1280, in Cologne, Germany. Since November 15, 1954, his relics have been located in a Roman sarcophagus in the crypt of the Dominican St. Andreas Church in Cologne. He was named a saint and a doctor of the church on December 15, 1931—one of only 36 named doctors. On December 16, 1941, Pope Pius XII anointed Albert as the patron saint of the natural sciences.

He is the patron saint of medical technicians, natural sciences, philosophers, scientists, and Cincinnati, Ohio—home to Forward Movement!

Collect for Albert the Great
O God, by your Holy Spirit you give to some the word of wisdom, to others the word of knowledge, and to others the word of faith: We praise your Name for the gifts of grace manifested in your servant Albert, and we pray that your Church may never be destitute of such gifts; through Jesus Christ our Lord, who with you and the Holy Spirit lives and reigns, one God, for ever and ever. Amen. 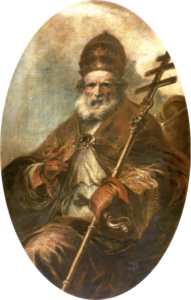 It was within the unsettled west that Leo the Great served the church. The Western Empire was constantly under threat of invasion from the east and north. Around 440, Leo was sent to Gaul as a peacemaker between two generals whose bickering endangered Gaul’s safety; while he was there, he received word that he had been elected bishop of Rome.

Service as Pope in the middle of the fifth century didn’t carry the prestige it does today. Leo worked to assert the authority of the Roman pontiff as the successor of Peter: he asserted a strong hand in the furthest reaches of the Western Empire over recalcitrant bishops, and he worked energetically in Gaul, Spain, and Africa to combat the anathematized teachings of Manicheans, Pricillians, and Pelagians.

Yet while Leo built up the power of the Roman See, his gifts as a peacemaker left the most profound impression on Christianity as a whole. Debate had continued for centuries across the church as to the nature of Jesus Christ. Leo wrote with authority, dignity, and clarity that Jesus Christ is one person, the Divine Word, in whom human and divine natures are fully united without either confusion or mixture. The Tome of Leo was received by the Council of Chalcedon in 451; upon hearing it, the council is said to have remarked that “Peter has spoken by Leo.”

Leo was not limited to keeping the peace in church disputes. When Attilla the Hun surrounded Rome in 452, Leo personally negotiated with him to accept tribute instead of plundering and destroying the city. Three years later, as the Vandals surrounded Rome, Leo again sought peace. This time his efforts failed, yet his intervention is credited with saving the city from burning and mass slaughter.

His care for the integrity of the church and the safety of the people entrusted to its care commend him to the memory of the church as one of its saints; his feast day is celebrated on November 10.

Collect for Leo the Great
O Lord our God, grant that your church, following the teaching of your servant Leo of Rome, may hold fast the great mystery of our redemption and adore the one Christ, true God and true Man, neither divided from our human nature nor separate from your divine Being; through the same Lord and Savior Jesus Christ; who lives and reigns with you and the Holy Spirit, one God, for ever and ever. Amen.

Albert the Great vs. Leo the Great

197 comments on “Albert the Great vs. Leo the Great”