Welcome to the opening matchup of Lent Madness 2021! We kick things off with what we're calling the Gambler's Gambit, a matchup between Camillus de Lellis and Matthias. Of course, there's much more to these two than the fact that one is a reformed gambler and the other was chosen by lot (gambling!). But that's what our amazing Celebrity Bloggers are here for -- to bring to life the varied aspects of our saintly lineup over the coming weeks.

If you’re a veteran of the Saintly Smackdown, we’re delighted you’re back for another year of saintly thrills and spills. If you’re joining us for the first time, we’re especially glad you’re along for this wild penitential ride. If you’re curious about what this all entails, check out the About Lent Madness tab on the website. We assure you this is the safest, most socially-distanced Lenten devotion out there.

To experience the fullness of the Lent Madness experience, the Supreme Executive Committee (the somewhat benevolent dictatorship that runs this whole enterprise) encourages you to do several things. First, "like" Lent Madness on Facebook and/or follow us on Twitter. Second, subscribe to the Lent Madness e-mails so you never miss a vote — you’ll get each matchup hand-delivered to your inbox on the weekdays of Lent. You can do this by going to the home page of our website and entering your e-mail address (near the top right). Third, you can support the ministry of Lent Madness by heading over to the Lentorium and purchasing Lent Madness swag, thereby impressing everyone in your virtual pew.

But mostly, we encourage you to read about the 32 saints participating in this year’s edition of Lent Madness, faithfully cast your (single!) vote on the weekdays of Lent, and add your comments to the great cloud of participating witnesses that gathers as the online Lent Madness community each year. If you’re wondering when your favorite saint will be competing – in order to rally your friends and neighbors (creative campaigning is encouraged, voter fraud is not) – you can check out the 2021 Matchup Calendar.

But enough blathering. It's time to cast your very first vote of Lent Madness 2021! 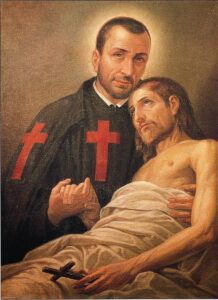 Camillus began his life as anything but a saint. Born in 1550 in Italy, he was the son of a soldier who himself became a soldier of fortune. He had a well-deserved reputation for being a scoundrel, a gambler, and all-around trouble-maker. He suffered from a leg wound, but when he went to a hospital, Camillus was ousted because of his argumentative nature.

Ultimately, his leg wound brought his soldiering to an end, so he took up gambling. Destitute and desperate for food and a place to sleep, Camillus begged employ at a Capuchin friary in Manfredonia, Italy. After time with the order, he had a religious conversion. He applied to become a Franciscan three times but was denied because of his incurable wound and a lack of education.

The leg wound continued to plague Camillus, so he went back to the same hospital for treatment, working in exchange for a place to live. He eventually became the hospital’s superintendent while growing in his faith through spiritual direction, confession, and prayer. He still occasionally gambled and brawled, as old habits die hard. But he was also committed to a life of love and service and was ordained to the priesthood in 1584.

Inspired by his time at the hospital, Camillus gathered a group of lay and ordained men to tend to the needs of the poor and destitute who were sick, wounded, suffering, and dying. He called this group Servants of the Sick. In 1591, Pope Gregory XIV changed the name to Order of Clerks Regular, Ministers of the Infirm. This new religious order wore black cassocks and capes with a red cross over the chest—the original red cross insignia.

Camillus organized his order to help wherever needed: private homes, jails, streets, and battlefields. In 1601 during a battle, the Camillans’ hospital tent and all their supplies were burned to the ground except the red cross of one member’s religious habit—surely, they thought, a sign of divine approval for their work to help the sick and dying.

Camillus was canonized in 1746 and is a patron saint for hospitals, those who are sick, nurses, and doctors. He also offers divine assistance for those struggling with a gambling addiction. This order takes traditional vows, as well as a vow of unfailing service to the sick, even at risk to their own lives.

Collect for Camillus de Lellis
Heavenly Father, whose blessed Son came not to be served but to serve: Bless all who, following in his steps, give themselves to the service of others; that with wisdom, patience, and courage, they may minister in his Name to the suffering, the friendless, and the needy, for the love of him who laid down his life for us, your Son our Savior Jesus Christ, who lives and reigns with you and the Holy Spirit, one God, for ever and ever. Amen. 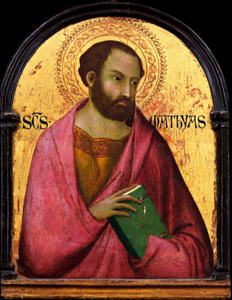 “And they cast lots for them, and the lot fell on Matthias; and he was added to the eleven apostles.” With that action, as detailed in Acts 1:26, Matthias joined the other Apostles, replacing the betrayer Judas Iscariot.

Other than the fact he was born in Judea, Matthias’s early life is lost to history and not much is known about him. However, according to tradition, he had been one of Jesus’ seventy disciples at the baptism by John the Baptist in the River Jordan. In fact, the witnessing of Jesus’ baptism was a key element in Matthias’s nomination to replace Judas. The other requirement was being present at the Ascension.

After the betrayal by Judas, the remaining apostles believed it was critical to keep their number at twelve, representing the twelve tribes of Israel. Two disciples met the standards for nomination; they cast lots, and Matthias was chosen. While Matthias’s selection occurred after the ascension of Jesus, it was before the Day of Pentecost. Therefore, Matthias was with the group in the Upper Room at the descent of the Holy Spirit. As with the other apostles, his ministry blossomed following the miracle of Pentecost.

From Jerusalem, Matthias traveled far to spread the word of Jesus. Historians say his ministry focused near Cappadocia in modern-day Turkey and the area around the Caspian Sea. Some reports indicate he made his way to today’s country of Georgia.

He died in 80 ce, but the particulars of his death vary greatly. Some report he was stoned to death and then beheaded in Jerusalem, while other accounts have him dying near Sebastopolis, now in Turkey, and still another stated he died of old age. As for his remains, some are interred in the Abbey of Santa Giustina, in Padua, Italy, thanks to Saint Helena, the mother of Emperor Constantine, who had them transported there. Other relics are located in the Abbey of St. Matthias, in Trier, Germany.

He is the patron saint of alcoholics; tailors; Gary, Indiana; and Montana. He is prayed to for hope and perseverance and in instances of smallpox. He is often portrayed holding an ax, widely believed to be the instrument of his death. His feast day is February 24.