Congratulations! You have successfully made it to day two of Lent Madness 2021. If Lent Madness is part of your Lenten discipline this year - and we sincerely hope it is - you're doing great so far! Our competition continues today with an intriguing matchup between Miguel Pro and Constantine. You might say there are PROS and CONS to be weighed as you decide for whom to cast your vote.

In yesterday's opening matchup, Camillus de Lellis trounced Matthias in a Biblical beatdown 71% to 29% to advance to the Saintly Sixteen. If you'd like to see an updated bracket, you can simply visit the Bracket Tab each day. Bracket Czar Adam Thomas updates it daily for your viewing pleasure. He also shares links to each previous battle, which comes in handy when you seek a refresher in the later rounds.

Speaking of brackets, in case you missed the incredible peg doll video featuring all 32 saints in this year's bracket created by the talented team at the Cathedral of St. James in South Bend, Indiana, you can watch it here. Seriously. Do yourself a favor and revel in two minutes of joy that we could all surely use.

Finally, don't forget to tune in tomorrow for the ONLY Saturday matchup of Lent Madness as Tarcisius takes on Egeria. 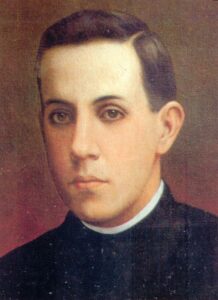 José Ramón Miguel Agustín Pro Juárez was born in 1891 in Guadalupe, Zacatecas. After entering the Jesuit novitiate and completing theological studies in Europe, Miguel Pro returned to Veracruz in 1926. His ministry quickly went underground on account of the violent anti-Catholic repression, and he signed his letters with his childhood nickname of “Cocol” to obscure his identity.

Telling the story of Miguel Pro requires entering into a fraught period of Mexico’s history called the Cristero rebellion, when the Roman Catholic Church’s official and unofficial institutions engaged in a ten year, violent rebellion against the anti-Catholic regime.

For many Mexican Roman Catholics, including Miguel Pro, the Cristero Rebellion was the heroic story of the faithful engaging in overt and covert resistance against an extremely violent and repressive anti-Catholic effort. One of the most famous images is of railroad tracks in Jalisco lined by the executed bodies of Cristero rebels. The Cristeros are frequently presented by the Roman Catholic Church as heroes who took up arms against such repression.

In contrast, when I studied Mexico-U.S. border relations in el Tecnológico de Monterrey in Querétaro, Mexico, this period was presented as part of a broader set of internationally led efforts to undermine the 1917 Constitution, a socialist-inspired document whose agrarian reforms had aligned Mexico’s elite Roman Catholic families with U.S. interests. Indeed, America’s fingerprints are all over this conflict, from funneling money to the rebels to negotiating a peace agreement that led to the church’s withdrawal of support for the Cristeros.

In 1927, an innocent Miguel Pro was executed without trial for the attempted assassination of former Mexican president Álvaro Obregón; photos of his execution became a rallying point in the final years of the rebellion. Miguel Pro was pointedly beatified by Pope John Paul II in 1988, a period when the Roman Catholic Church was once again deeply engaged in resisting socialist and communist governments and Latin American liberation theology.

At his execution, Miguel Pro raised his arms in imitation of Christ and shouted ¨Viva Cristo Rey!” — “Long live Christ the King!”, the defying cry of the Cristeros.

Collect for Miguel Pro
Almighty God, who gave to your servant Miguel boldness to confess the Name of our Savior Jesus Christ before the rulers of this world, and courage to die for this faith: Grant that we may always be ready to give a reason for the hope that is in us, and to suffer gladly for the sake of our Lord Jesus Christ; who lives and reigns with you and the Holy Spirit, one God, for ever and ever. Amen. 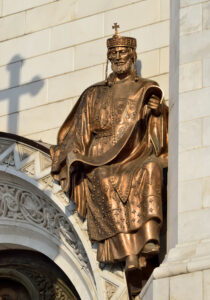 Constantine the Great is a complex character in the history of Christianity. What is without debate is that he profoundly influenced the direction of Christianity. He is a saint in the Orthodox tradition.

Constantine was born in 272 ce in modern-day Serbia to one of Rome’s four emperors, Constantius. His mother, Helena, was not of noble birth and may have been simply Constantius’s concubine. She was a deeply pious Christian and, no doubt, shaped Constantine’s relationship to Christianity. Constantine excelled as a military leader and ultimately succeeded his father as the emperor of Britain, Gaul, and Spain. A series of power struggles and civil wars led to his consolidation of power as the sole emperor of the Roman Empire.

One of the most significant battles was with Maxentius, a rival to the throne, on the Milvian Bridge. Shortly before the battle, Constantine had a vision in which he (and purportedly also his army) saw a cross of light in the sky with the words, “In this conquer.” The following night, Christ appeared to him and told him to make his standards with the chi-rho Labarum ☧ (chi and rho are the first two letters of Christ in Greek). Constantine obliged and his army under that sign did indeed conquer.

Following this victory, one of Constantine’s first legislative acts was to issue the Edict of Milan, which brought about the universal toleration of Christianity and the return to Christians of all property that had been taken from them. Whatever his personal convictions, his preferential treatment of Christians was a hallmark of his reign. He helped guide the Christian church through major controversies, including the Arian debate for which he gathered the bishops from across the Roman Empire for the Council at Nicae—and funded the meeting entirely out of his coffers.

Constantine was also a major patron of the church—he gifted a villa that would become the foundation of St. John Lateran, he gifted the Vatican fields, and in Jerusalem he supported the construction of the important Church of the Holy Sepulchre and Church of the Holy Nativity. In 321, Constantine legislated that Sunday be a day of rest.

Constantine was baptized on his deathbed in May 337. Throughout the Middle Ages, he was revered as both a godly man and as a model ruler.

Collect for Constantine
Almighty God, you have surrounded us with a great cloud of witnesses: Grant that we, encouraged by the good example of your servant Constantine, may persevere in running the race that is set before us, until at last we may with him attain to your eternal joy; through Jesus Christ, the pioneer and perfecter of our faith, who lives and reigns with you and the Holy Spirit, one God, for ever and ever. Amen.

180 comments on “Miguel Pro vs. Constantine”