For the Golden Halo: Benedict the Moor vs. Absalom Jones

The end (of Lent Madness 2021) is near! It's hard to believe we kicked things off over five weeks ago on “Ash Thursday” with 32 saintly souls. With your help, the field has been whittled down to just two: Benedict the Moor and Absalom Jones. Who will receive the coveted 2021 Golden Halo? That, friends, is up to you.

This excellent video comes from the Cathedral of Saint James in South Bend, Indiana, makers of the awesome opening video for this year's Lent Madness.

Regardless of the ultimate outcome, we’ve met some truly remarkable holy people along the way. Perhaps you learned about some folks you’d never heard of before (lots of those this year!) or maybe you renewed acquaintances with saints who have long offered inspiration. Of course the entire notion of placing saints in a bracket is absurd — each “contestant” has already earned a crown of righteousness in addition to a “golden halo.” But at the heart of Lent Madness is the abiding conviction that encountering those who have come before us in the faith enriches and enlivens our own walk with the risen Christ.

Thank you to Richelle Thompson and everyone at Forward Movement for putting up with our shenanigans and producing a terrific Saintly Scorecard this year. Special gratitude goes to Alyssa Finke for helping get words and images into the website each day. 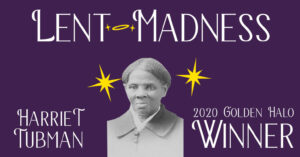 Harriet Tubman prepares to pass off the Golden Halo to this year's winner.

Before we invite you to cast this final vote, we should note that David Hansen has ably shepherded Benedict the Moor through the bracket, while Miriam McKenney has done the same for Absalom Jones. We’ve asked them for a single image and one quote either by or about their saint. We’ve already heard a lot about Benedict and Absalom — click the Bracket tab and scroll down to view their previous match-ups if you want to refresh your memory. And then, it’s time to make your choice.

The polls will be open for 24 hours and the winner will be announced at 8:00 am Eastern time on Maundy Thursday. Now go cast your vote — the 2021 Lent Madness Golden Halo hangs in the balance! 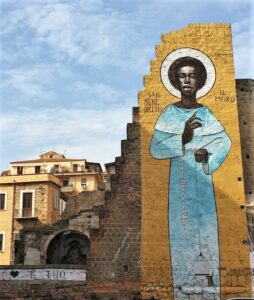 "I am a miserable sinner, and full of pride; pray God to make me humble."

-- Benedict of Palermo (aka the Moor) 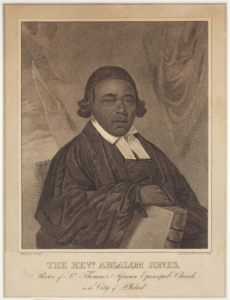 "Let the first of January, the day of the abolition of the slave trade in our country, be set apart in every year, as a day of publick thanksgiving for that mercy. Let the history of the sufferings of our brethren, and of their deliverance, descend by this means to our children, to the remotest generations; and when they shall ask, in time to come, saying, What mean the lessons, the psalms, the prayers and the praises in the worship of this day? let us answer them, by saying, the Lord, on the day of which this is the anniversary, abolished the trade which dragged your fathers from their native country, and sold them as bondmen in the United States of America."

Benedict the Moor vs. Absalom Jones

119 comments on “For the Golden Halo: Benedict the Moor vs. Absalom Jones”