On Friday, James Holly defeated Kateri Tekakwitha 58% to 42% to advance to the Elate Eight.

Later today, keep your holy eyes peeled for this week's episode of Monday Madness. It will, naturally and inevitably, be epic. But first, go vote! 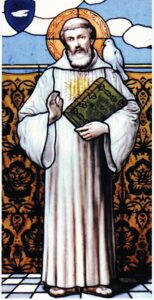 Like so many holy and notable historical figures, St. Columbanus’s birth was foreseen in visions by his mother, and in those visions, he was predicted to grow into a remarkable genius.

Around the age of forty, after living the monastic life for many years in Ireland, he went to the continent and began his impressive and successful missionary work founding monasteries and converting Celts to Christianity. As the monasteries grew, he often sought solitude in nearby caves. Sometimes, the cave was already occupied. One of the miracles attributed to him to verify his sainthood happened when he spiritually compelled a bear to vacate the cave where Columbanus wanted to pray in peace and quiet. When Columbanus lived in the cave, he relied upon a companion to travel back and forth to the Abbey with messages. The messenger was not, in fact, the bear.

Columbanus was incredibly skilled at winning the patronage of influential people. According to his biographer, Jonas of Susa, “he could be impetuous and even headstrong, for by nature he was eager, passionate, and dauntless. These qualities were both the source of his power and the cause of his mistakes.” He allied himself with kings and grew powerful, which made him the enemy of bishops. Monastic and diocesan tensions flared over matters of grave theological importance: the method of calculating the date of Easter and the proper shape of a monk’s tonsure.

The bishops of France objected that Columbanus and his monks calculated the date of Easter according to the Irish method instead of the Roman one. While this squabble was undoubtedly about power and prominence, it also caused a practical complication around when, in fact, Lent ended and feasting could begin.

The Frankish bishops also disapproved of the way Columbanus’s Irish monks wore their hair. While Roman clerics shaved the top of their heads, leaving a narrow circular band of hair called a corona, the Irish monks wore a different hairstyle. Much scholarly debate has been waged over this crucial spiritual detail–what exactly was the shape of the Irish tonsure? Sources claim the head was shaved over the crown from ear to ear but was it curved across the forehead, or pointed in an exaggerated widow’s peak? Salvation hangs in the balance. Will we ever know for sure? And which is the correct and holy way?

Eventually, the theological controversies died down, at which point, Columbanus rebuked the royal family of Burgundy for immoral behavior and was taken captive by them, but managed to escape.

Columbanus has a few other notable miracles attributed to him. He is credited with multiplying bread and beer for his monastic community, but on another occasion when beer was prepared for a pagan celebration, he destroyed the barrel of beer with his breath. Clearly, he was filled with the Holy Spirit.

Lastly, Columbanus was known as a friend to animals. When he walked in the woods, birds landed on his shoulder and squirrels cozied up in his cowl. While he did not employ a bear as his messenger from his cozy cave, he did tame one and yoke it to a plow. 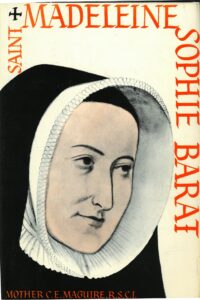 Madeleine Sophie Barat was the youngest member of the budding order of the Sacred Heart when she was appointed Mother Superior. Before any of her sisters could congratulate her, Sophie knelt down and began to kiss their feet. As one Sister remembered, “such was the spirit of her government”.

The Religious of the Sacred Heart of Jesus (RSCJ) took the traditional three vows of religious life (poverty, chastity and obedience), as well as a vow of education. They were meant not just to teach, but to cultivate “the heart of an educator”, helping people to discover their God-given gifts so that, “they may discover the significance of their lives, devote themselves to others and help transform the world.” In Mother Barat’s words, “Present day society will be saved by education; other means are almost useless.”

The Society made education available to the rich and poor alike. Knowing that hungry students couldn’t learn, Mother Barat and her sisters served a midmorning snack. This practice is known as Goûter (to taste), and continues today.  Another beloved Sacred Heart practice still in use is “Congé”. Meaning “to take leave”, in this yearly celebration all classes are canceled and replaced with games, treats, and other fun for students.

Mother Barat didn’t want new students to think of school as a punishment. New arrivals were not to be served “sensible food”, but given whatever they asked for, even if it was trouble for the kitchen. One nun who worked with Mother Barat wrote about a little girl who demanded "potatoes that open with butter inside." Mother Perdrau sat with the girl and listened to her while the potatoes disappeared. When the Sister took the child to her new dormitory, “the child hugged her pillow happily, then suddenly threw her arms around me. ‘Why do you love me so much?’, she asked, ‘You’ve never seen me before!’”

Mother Barat’s own words are perhaps the best way to encounter her legacy:

“What is needed for winning parents and children is to be busy about them, at their service from morning to night; to forget oneself and enter into what concerns the children, body and soul; to listen to them with interest; to console and to encourage them; finally to sacrifice for them everything except one's soul; and become for their sakes gentle, patient, indulgent, in one word, a mother.”

“Let us respect childhood; let us honor the soul of that small creature of God who can already make choices of the best if we take the time to awaken her reason and make her use her judgment.”

“We don’t live with angels; we have to put up with human nature and forgive it.”

“Let your heart be more attentive than your head, for the Holy Spirit is love, and to take hold of her, it is more important to love than to understand.”

In perhaps the ultimate act of quirkiness, Mother Barat is said to have predicted her own death, which took place on the Feast of the Ascension, May 25th 1865.

81 comments on “Columbanus vs. Madeleine Barat”