Welcome to the final battle of a wacky, saint-filled week! Today we get James Theodore Holly vs. Kateri Tekakwitha. And, yes, things only get harder as we move deeper into the bracket. It's Madness!

Yesterday, Teresa of Avila swept past Stephen 60% to 40% to become the first saint to make it to the Elate Eight.

If you’re a competing type and, well, maybe your original bracket blew up, you can start anew with the Saintly Sixteen! This new feature allows you to pit your predictions against others in the Lent Madness voting public. Give it a try here! And then go vote. 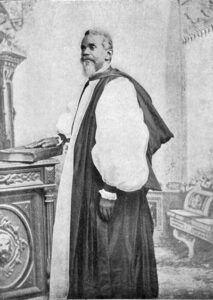 "Notwithstanding the remarkable progress of philanthropic ideas and humanitarian feelings, during the last half-century, among almost every nation and people throughout the habitable globe; yet the great mass of the Caucasian race still deem the negro as entirely destitute of those qualities, on which they selfishly predicate their own superiority."

Bishop James Theodore Holly unleashed these words in a lecture entitled "A Vindication of the capacity of the Negro race for self-government, and civilized progress, as demonstrated by historical events of the Haytian revolution: and the subsequent acts of that people since their national independence." The title says a lot, and Holly says much more. Much like reading Howard Thurman, one could highlight and underline much of this text as accurate, necessary, scathing, and painful, no matter where you find yourself in his discourse and how many commas he used.

"And we may add to this overwhelming class that cherish such self-complacent ideas of themselves...a large quota also of that small portion of the white race, who profess to believe the truth...that "He has made of one blood, all the nations that dwell upon the face of the earth." We may add a large number of the noisy agitators of the present day, who would persuade themselves and the world that they are really Christian philanthropists, to that overwhelming crowd who openly traduce the negro; because too many of those pseudo-humanitarians have lurking in their heart of hearts, a secret infidelity in regard to the real equality of the black man, which is ever ready to manifest its concealed sting, when the full and unequivocal recognition of the negro, in all respects, is pressed home upon their hearts." In short, in 1857, Holly identified racists and those with imposter syndrome.

"Hence, between this downright prejudice against this long-abused race, which is flauntingly maintained by myriads of their oppressors on the one hand; and this woeful distrust of his natural equality, among those who claim to be his friends, on the other; no earnest and fearless efforts are put forth to vindicate their character, by even the few who may really acknowledge this equality of the races." Ouch. And accurate. "But to the contrary, everything is done by the enemies of the negro race to vilify and debase them. And the result is, that many of the race themselves, are almost persuaded that they are a brood of inferior beings." ALMOST. Praise God for almost!

He then shares his reason for his lecture: "I wish, by the undoubted facts of history, to cast back the vile aspersions and foul calumnies that have been heaped upon my race for the last four centuries, by our unprincipled oppressors; whose base interest, at the expense of our blood and our bones, have made them reiterate, from generation to generation, during the long march of ages, everything that would prop up the impious dogma of our natural and inherent inferiority." Thank God for the life and witness of Bishop Holly. May we continue the work. 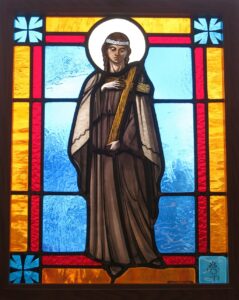 Kateri Tekakwitha’s story resonates in a time of pandemic when her own life was marked by a smallpox epidemic that claimed her family and her eyesight.

Her story also resonates in a time of war, as she lived in exile from her land and people, fleeing persecution for her Christian beliefs to a Jesuit mission near Montreal.

The quirkier and more quotable parts of Kateri Tekakwitha’s story largely come to us from two Jesuit priests who knew her, Pierre Cholenec and Claude Chauchetiere.

In the priests’ telling, the story of her journey to the mission plays out like an action movie. While her uncle was away, she fled their home in what is now New York with a Christian relative and another man. The murderous uncle, hearing his niece had gone missing, loaded three bullets in his gun and pursued them. When he caught up to them, she was nowhere to be found, hidden in the forest.

At the mission, Kateri Tekakwitha famously asked the question, “Who will teach me what is most agreeable to God so that I may do it?” She often could be found at church, carrying a crucifix with her or making crosses from branches and hanging them in the trees when she was away. She also declined to marry and is believed to be the first Native American to take a vow of perpetual virginity.

Less quirky and more disturbing were her severe penances, such as praying the rosary in the snow or, after breaking through the ice, in the waters of a frozen river.

Kateri Tekakwitha died at just 24 years old — the penances probably didn’t help — during Holy Week at the mission. Her last words reportedly were “Jesus, Mary, I love you.”

Perhaps the most famous stories about the saint are what came next: How after her death, her smallpox-scarred face reportedly became “changed and pleasant,” as Cholenec recounted. Lilies supposedly bloomed from the place where Kateri Tekakwitha, known as the “Lily of the Mohawks,” was buried. Several people at the mission claimed to have seen her in visions after her death, including Chauchetiere.

In the priest’s vision, she appeared “surrounded by glory, bearing a pot full of maize,” he wrote. At her side was an overturned church building, which proved prophetic: Months later, a storm destroyed the mission church. Like a scene from another action movie, three priests were “carried into the air.” All were later found with just minor injuries, which they credited to the prayers of Kateri Tekakwitha.

Cholenec wrote of her, “All the French who are in the colonies, as well as the Indians, hold her in singular veneration. They come from a great distance to pray at her tomb, and many, by her intercession, have been immediately cured of all maladies, and have received from heaven other extraordinary favors.” For the French, he said, “She then made it apparent, that one is able to serve God in all places where his providence calls him.”

Her story still does.