Yesterday in the Saintly Smackdown, José Gregorio Hernández defeated Emma of Hawaii 55% to 45%.

On Tuesday next week we kick off the Elate Eight. In the meantime, on Monday, prepare for Oscar vs. Thomas Aquinas. Hang onto your halos! 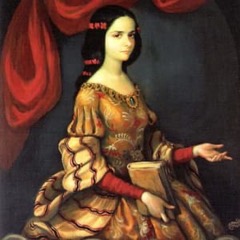 Juana Ines de la Cruz is most well known for her writing, but this was not all she could do.  When she left her family at age 16, to live in Mexico City, she became a lady-in-waiting to the wife of the viceroy of New Spain.  The viceroy was so amused by his wife’s new companion’s smarts that he made a game of “Stump Juana”.  He would invite the most prominent lawyers, philosophers, and theologians of the day to a meeting, make Juana stand in the center of the assembly, and then ask his guests to fire questions at her.  This very odd parlor game led to Juana becoming the hip new sensation in the royal court.  (It also led to several besotted young men offering to whisk Juana away from all this, but she always declined.)

She seemed to be a little obsessive about learning—after joining the abbey in order to have more time to study, she made a habit of cutting off a lock of hair each time she failed to memorize a Latin grammar lesson properly. “It didn’t seem right to me that a head so naked of knowledge should be so dressed up with hair, for knowledge is a more desirable adornment.”

And she didn’t only know Latin, Greek, and Spanish—she also taught herself Nahuatl—the indigenous language spoken in the central Mexican highlands. In 1570, King Phillip II of Spain had actually decreed that Nahuatl would the official language of the settlements of New Spain throughout Mexico and Central America, so she was taking part in a flowering of literature being written in this language at the time, that then died out by 1696, when King Charles outlawed the speaking of all indigenous languages.

In the convent, she accrued musical instruments, her own laboratory for conducting experiments, and over 4,000 books.  She would receive visits from the greatest thinkers and writers of her day.  “I do not study in order to write, nor far less in order to teach (which would be boundless arrogance in me), but simply to see whether by studying I may become less ignorant.  This is my answer, and these are my feelings”, she said.

But this didn’t last forever—after her patrons (the viceroy and his wife) were recalled to Spain, she lost much of the social protection she had relied on for her writing.  The new archbishop of Mexico City was much more conservative, and railed against Juana’s writing and study.  She replied, “Who has forbidden women to engage in private and individual studies?  Have they not a rational soul as men do?…I have this inclination to study, and if it is evil, I am not the one who formed me thus—I was born with it and with it I shall die.” 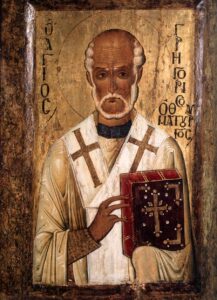 Origen is considered the father of systematic theology for the Church.  By name, systematic means to peel the nature of God through a step-by-step process to elicit understanding.  Origen believed that through systematic study of God, we grow in our faith and understanding of our maker, and a deeper closeness with the mystery.  Origen was a mathematician with words about God, but unafraid of the unknown.  His thoughts, process, and depth of understanding God were precise, carefully tested, and documented so that others may see the beauty and awe of God. And yet, Origen also understood that even with the most rigorous of study, we can never fully fathom the great I AM:

“Having refuted, then, as well as we could, every notion which might suggest that we were to think of God as in any degree corporeal, we go on to say that, according to strict truth, God is incomprehensible, and incapable of being measured. For whatever be the knowledge which we are able to obtain of God, either by perception or reflection, we must of necessity believe that He is by many degrees far better than what we perceive Him to be.”

In a scathing rebuke to those who interpret God through a solely legalistic interpretation of scripture and not taking the time to reflect on the spirit of the Word, Origen is said to have replied:

“The reason why all those we have mentioned hold false opinions and make impious or ignorant assertions about God appears to be nothing else but this, that scripture is not understood in its spiritual sense, but is interpreted according to the bare letter.”

Origen is also credited with a sound interpretation of why we only need one Christ:

“There was no need that there should everywhere exist many bodies, and many spirits like Jesus, in order that the whole world of men might be enlightened by the Word of God. For the one Word was enough, having arisen as the "Sun of righteousness (Malachi chpt. 3)," to send forth from Judea His coming rays into the soul of all who were willing to receive Him.”

Origen challenges to understand God through his Word, and that one Word is enough, that all we need for a holy life is found in Jesus Christ.

And Origen calls us to study.  As God works tirelessly in our lives to transform us, we too should work tirelessly to find a glimmer of God in all things:

“In this way, then, by the renewal of the ceaseless working of Father, Son, and Holy Spirit in us, in its various stages of progress, shall we be able at some future time perhaps, although with difficulty, to behold the holy and the blessed life, in which (as it is only after many struggles that we are able to reach it) we ought so to continue, that no satiety of that blessedness should ever seize us; but the more we perceive its blessedness, the more should be increased and intensified within us the longing for the same, while we ever more eagerly and freely receive and hold fast the Father, and the Son, and the Holy Spirit.”

Origen teaches us to never think we know enough of God, that we should always thirst for more.