Today it's the second of four battles comprising the Elate Eight as Dietrich Bonhoeffer faces off against Jerome. Could there possibly be any saintly kitsch for these two? A Vulgate Snuggy perhaps or a Bonhoeffer chew toy for your puppy? Let's see what our intrepid Celebrity Bloggers dug up.

In yesterday's Elate Eight kick-off, Mary Magdalene made quick work of Evelyn Underhill 77% to 23% to make it to the Faithful Four. She'll face the winner of tomorrow's match-up between Margaret of Scotland and Enmegahbowh.

To get to this round Bonhoeffer beat James and Brigid while Jerome defeated John Patteson and Philander Chase. Click on the links in the previous sentence if you need a refresher course on today's combatants. And check the updated bracket for upcoming battles.

As you might have guessed, it’s one thing to discover a few quirks about Dietrich Bonhoeffer and quite another to find saintly kitsch related to this 20th-century martyr who died at the hands of the Nazis. Nevertheless, there are items that can indeed be purchased to provide a bit of inspiration for the uninspired masses who see you wearing or using them: 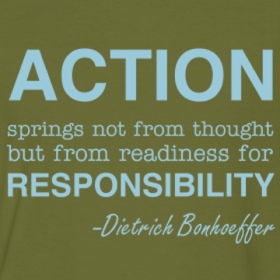 Those who like to hug trees and, therefore, dislike buying “stuff” might want to reconsider that noble and principled position after reading about this t-shirt, which is made from 100% certified organic cotton and, therefore, green both in color and in composition. It comes with a quote from Bonhoeffer to disturb the consciences of those who cross your path each day that you put it on. It is also, as stated on the website,

“kind to the environment,” so how could you not feel guilty wearing something else. Lastly, it appears to be “signed” by Bonhoeffer himself in a cursive-like font.

Alternatively, if you prefer to be a little more subtle in your public witness, there’s a plain white t-shirt available with a simple drawing that’s based on a pop 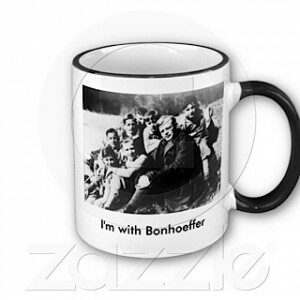 ular photograph of Bonhoeffer. Here’s the rub: You’ll either have to tell everyone the identity of the person on this article of clothing or use it to weed out the theologically and historically uneducated folks in the crowd because Bonhoeffer’s name doesn’t appear on it.

Over at Zazzle, there are a couple of Bonhoeffer-related coffee mugs that you might want to add your collection (but only after obtaining your official Lent Madness coffee mug, available out there 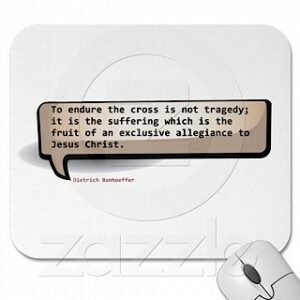 somewhere on the interwebs). One features a picture of Bonhoeffer surrounded by a group of young people and declares, “I’m with Bonhoeffer.” The other has a picture of the ten statues of 20th-century martyrs, including one of Bonhoeffer, that can be seen above the west doorway of London’s Westminster Abbey and represent those who have died under oppression and persecution.

Last but not least, Zazzle also carries this mousepad with a quote from Bonhoeffer that seems like the right note on which to end. So here it is:

If you thought there would be little to no kitsch involving the author of the Vulgate, you'd be wrong. Jerome is well represented in the saintly kitsch department. 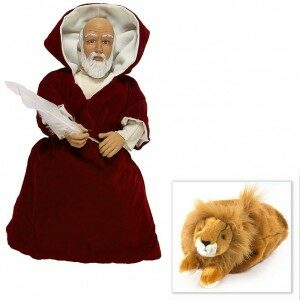 Let's start with the obvious: a coffee mug. Surely, that's the first thing that springs to people's minds when they think of Jerome. They think, as the ad with the mug says, Jerome "is in the desert where he spent five years praying and learning to overcome his flesh." The next obvious thought is: coffee! Coffee mug. "It has a large handle that’s easy to hold and comes in 11oz and 15oz sizes. Dishwasher and microwave safe. Makes a great gift." 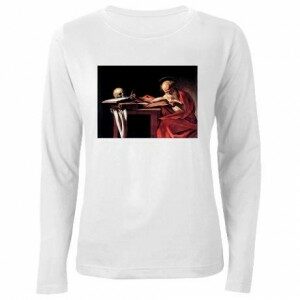 If coffee isn't your first thought when considering Jerome, surely your second thought MUST be a doll.

"St. Jerome lived as a hermit in the Syrian Desert, and it is reported that he once removed a thorn from a lion's paw, and the lion remained at his side for years. Measures 18" ta 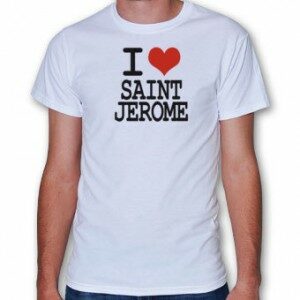 ll with head and hands made of flexible urethane rubber attached to a soft poly-fil cloth body." What is particularly stunning is that this doll "becomes a lion when flipped inside-out." Not only that but it "Includes a Certificate of Authenticity." Perhaps it's even signed by Jerome himself.

Then there's the St. Jerome T-shirt, complete with long sleeves for t 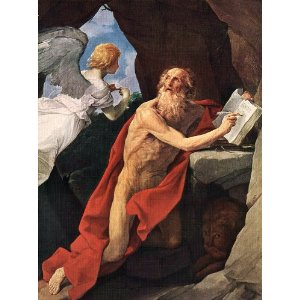 hose cold desert nights. And for lowering the chance of sunburn.

But wait there's more. Do you love Jerome? Wear your heart on your sleeve, or at least on your chest, with this snazzy short-sleeve t-shirt.

62 comments on “Dietrich Bonhoeffer vs. Jerome”