Welcome to the Faithful Four, friends. After weeks of learning and voting and occasionally squabbling (in a holy, churchy kind of way) we have whittled the field down to four spiritual heavyweights: Mary Magdalene, Margaret of Scotland, Dietrich Bonhoeffer, and Emma of Hawaii. Collectively, it’s a fascinating group of four heroes of the faith stretching from Biblical times to the 20th century.

Today Mary Magdalene (Meredith Gould) takes on Margaret of Scotland (Penny Nash); tomorrow Dietrich Bonhoeffer (Neil Alan Willard) battles Emma of Hawaii (Heidi Shott); and on Spy Wednesday the championship round will take place. In this round, we let our four remaining Celebrity Bloggers loose as they answer the question “Why should Saint XX win the Golden Halo?” In other words, they’ve been charged with letting us know why their particular saint is so awesome. And, in a nod to the fact that the SEC is responsive to the cries of (some of) the masses, we are including a few works of saintly art.

To make it to the Faithful Four, Mary Magdalene dispatched John Huss, Joan of Arc, and Evelyn Underhill with relative ease. Margaret of Scotland bested William Temple and John Cassian before squeaking by Enmegahbowh. See the updated bracket and then please vote just once. 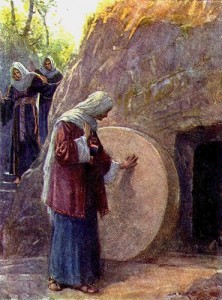 What calls any of us to embrace a particular saint? Our saints are extraordinary models of Christian faith and fidelity.  Throughout history, all have endured conditions and situations that, despite our best imaginations, we cannot fully comprehend.

These women and men of God are spiritual Sherpas, guiding us along the path; welcoming us back when we wonder and wander away. What makes Mary Magdalene first among equals is simply this:

“When Jesus rose early on the first day of the week, he appeared first to Mary Magdalene…” (Mark 16:9). 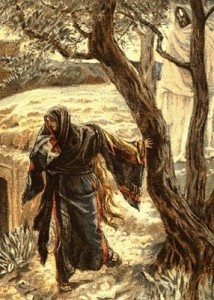 Jesus is indisputably the Christ, and entrusts Mary Magdalene with the near-thankless task of reporting his Resurrection from the dead. The disciples do not immediately believe her story of death defeated. Gospel stories about their resistance to hearing this liberating truth from a woman foreshadows a woeful and ongoing history of truth denied and evangelists mocked. (I sometimes find myself asking what has changed.) 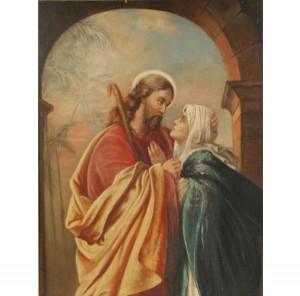 While I have a (short) list of holy women and men who help sustain my faith, Mary Magdalene, Apostle to the Apostles, is my radical go-to saint. Contemplating her love and loyalty to Christ Jesus keeps my heart from breaking whenever I focus too long on wreckage wrought in the name of religion. For all this and more, she’s already wearing a golden halo. 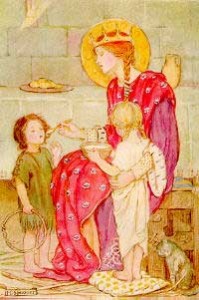 Why should Margaret of Scotland win the Golden Halo? Because she was an awesome, saintly saint! Oh, yeah? you may ask…well, read on.

Margaret was intelligent, beautiful and devout, and she walked the walk of Christian service. After her rescue from shipwreck in Scotland, she gave up her plan of withdrawing into a nunnery and married a rough Scottish king and changed the ethos in the court and castle. Eventually the king himself was converted to the faith, thanks not only to her fervent daily prayers but also her daily charitable works.

She rose at midnight to pray (remember how her husband followed her into a cave, thinking she met with an enemy, only to find her in earnest prayer for him?) and in the mornings refused to eat anything herself until she had fed from her own hand nine orphans and given bread and alms to all the needy people who crowded into the great hall. She and King Malcolm washed the feet of beggars who came to them for assistance, even when it wasn’t Maundy Thursday.

Inspired by the Bible, during Advent and Lent, she hosted 300 non-royal people in the castle for banquets where she and Malcolm waited the tables, and she established not only several monasteries (including rebuilding Iona) and churches (for which she sewed fine vestments herself) but also had hostels constructed for the poor.

Further, Margaret had shelters built for travelers and paid the ransom to set free English captives. And she created a free ferry system across the Firth of Forth to convey pilgrims to the shrine of Saint Andrew. I just love ferries, don’t you?  Gliding across the water in the brisk salt air, wind in my hair, gulls wheeling and crying overhead, plumes of sea spray arching over the bow as the boat cuts through the waves…What? Oh. Sorry. 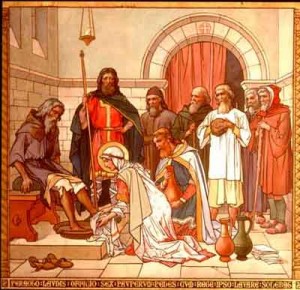 Margaret was a queen and wealthy, but she considered herself only a steward of that wealth. She used her power, influence, and resources to assist the poor and the hungry, orphans and pilgrims, prisoners and captives, as well as to build hostels, churches and abbeys. Instead of withdrawing from the world, she lived a disciplined life of labora et ora, work and prayer, in the world.

Margaret was not born at a time when she could touch Christ in person, but she strove to seek and serve Christ in everyone that she met in her own time and place. Plus she established the Queen’s Ferry and was awesome. She set an example for all of us to follow. And so, she deserves your vote for the Golden Halo!

90 Comments to "Mary Magdalene vs. Margaret of Scotland"

1 Trackback to "Mary Magdalene vs. Margaret of Scotland"