Harriet Tubman vs. Hilda of Whitby

The ever-kontroversial Saintly Kitsch Week continues with a tough choice between Harriet Tubman and Hilda of Whitby. Harriet made it thus far by storming past Nicholas Ferrar and Martha of Bethany. Hilda of Whitby made it to the Elate Eight by overwhelming Samuel Seabury before holding off a pesky Ignatius of Antioch. The winner of this match-up will earn a spot in the Faithful Four and a date with Frances Perkins. Get a preview of today's match-up from the hardest working video blogger this side of the Yukon Territory, Maple Anglican.

Yesterday we bid farewell to a valiant Florence Li Tim-Oi as she was soundly defeated by Oscar Romero. The martyred archbishop of El Salvador will now face the winner of tomorrow's battle between Luke and Dorothy Day.

We're halfway through the Elate Eight! By the weekend there will be just four saints standing. Is your favorite still in the bracket? Do you have someone you're passionately pulling for? Are you out campaigning and driving all of your friends and relatives crazy with this little churchy game you're playing? Has Lent ever been so awesome? Have you ever dreaded the approach of Easter? These are some of the questions hanging out there as you prepare to face more kitsch. 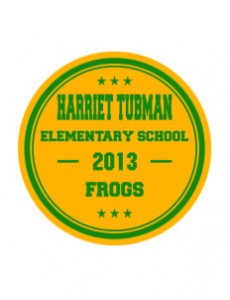 Harriet Ross Tubman, abolitionist, activist, soldier, spy, visionary and all-around fighter for justice, has much paraphernalia to her illustrious name.

First of all, there is an elementary school named after Harriet. They have much merchandise for the purchasing, and they are the Harriet Tubman Frogs. No clue why, but hey, frogs are intrepid little amphibians with their transforming and their adaptiveness! So, you go Harriet Tubman Frogs of Washington DC! Hop with bravery! 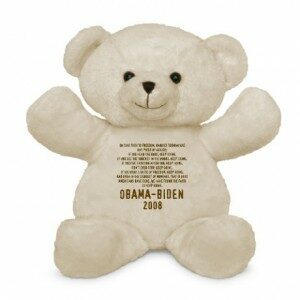 While you're hopping, you might get scared. In this case, why not get a cute Harriet Tubman-quoting teddy bear? YES. These exist.

(Ok, it would appear that this bear is quoting Hilary Clinton, who is quoting Harriet Tubman, at the '08 DNC, all in support of Obama in 2008. Which is a heck of a lot for one small bear's tummy to do, but still. Behold a multitasking teddy bear!)

If the idea of a politically-affiliated plush toy upset you, I have a solution. Behold, Harriet 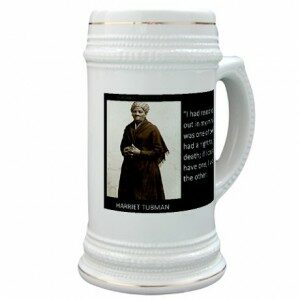 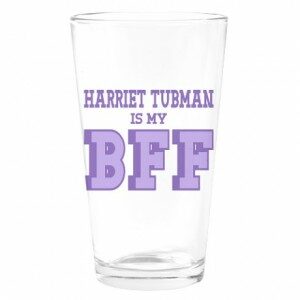 One, if you are assured of your closeness with Lady Moses, and one if you have some humility about you, somewhere.

(These are also available as wine chillers, for you die-hard Episcopalians.) 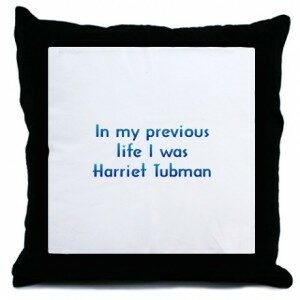 But if you are inspired, and want to fully decorate your abode in this theme, this can be done. Here, Tubman-themed throw pillows, and Tubman-quoting messenger bags.

(You thought the bear was confused on his message -- I don't know what the throw pillow is communicating. But you can get that message on a teddy bear too, so if the earlier teddy bear confused you, here's a viable alternative. You can also get this message on a pet bowl, which I'm not even going to attempt to unpack.)

Then, we have the usual dizzying array of t-shirts. Again, we have ones for those who want to take on the saint's identity: 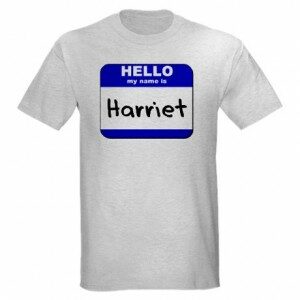 And finally, we have my personal favorite: 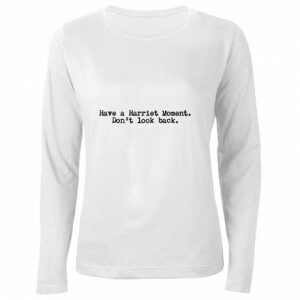 As for me, I am totally ordering one of those glasses.

Hilda, the great Abbess of the double monastery at Whitby, is more appropriately known as Hild of Streaneschalch (this proper Old English form of her name). However, since most of us can barely spell Episcopalian without spell-check, she is known in the church and throughout the world as Hilda. 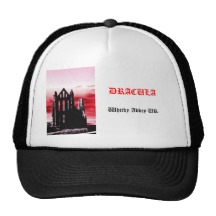 Whitby is seaside town in the English county of North Yorkshire. The actual monastery was sacked by the Vikings in the 9th-century and dissolved under Henry the VIII’s reign, eventually falling into ruins. The Abbey ruins inspired Count Dracula’s castle and served as a prominent landmark for sailors. So, if you’re looking to meld God and the current vampire fad together, you can purchase this stunning hat that shows you are hip and holy, all at the same time. Especially tasteful is the elegant “trucker cut” of the hat, sure to be flattering on clergy and laity alike.

Being a coastal town, the beaches of Whitby are home to ancient ammonite fossils. To the mere novice, they might simply look 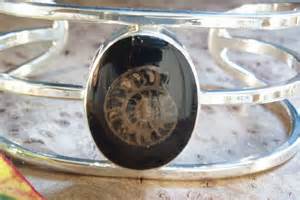 like the fossilized remains of prehistoric predatory squid-like creatures (hey, I wonder the Sy-Fy Channel has considered a “The Horrors of Hilda” movie, pitting predatory squids against Dracula? But I digress…). To the knowledgeable readers of Lent Madness, you know that these are in fact the skeletal remains of the plague of snakes that Hilda turned to stone after they messed with the wrong abbess. Scientists even named the genus of these particular ammonites Hildoceras. Hilda’s ammonites exist today, commonly known as snakestones. You, too, can order any number of jeweled settings such as this lovely silver cuff bracelet. Because trust me, it’s the classiest thing in this post.

If you’d like to read more about this particular snakes-to-stone account, Sir Walter Scott wrote all about it in his epic poem Marmion, filled with accounts of lust, betrayal, dishonest nuns, duels, being walled up alive, heroism, and love. Hilda’s involvement in the plot of about the locale only, in case you’re wondering if she and John Donne had more in common than being Anglican saints.

Hilda’s monasteries became havens for those looking to worship God, live in community, and be educated. Hilda saw the poetic skills of Caedmon

and urged him to write poetry in his native tongue. Her efforts as Abbess led to her being named the patron saint of learning, culture, and poetry.  Several schools are named in her honor, including the College of St. Hild and St. Bede, which has produced many scholars, artists, musicians, politicians, religious leaders, and not one, but two – two, I say -- of the actors who portrayed James Bond. 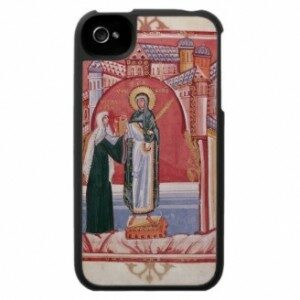 Historian JoAnn McNamara says of Hilda: She assumed a prestige usually reserved for bishops when she presided over the Synod where the Irish and Roman churches compete for the allegiance of the Northumbrian king. Hilda is likely most remembered for her presence at the Synod of Whitby. Hilda, along with St. Colman, lobbied for the Celtic expression of Christianity. Wilfrid supported the Romanized expression of the faith. In the end, Wilfrid and his supporters won. Hilda graciously accepted defeat and implored all present to conform to the Synod’s decision. Hilda may have conformed, but legend holds that she remained a critic of Wilfrid for the remainder of her life, even challenging his decision to withhold part of his diocese from one of Hilda’s protégé’s who was establishing a new monastery by sending her personal ambassador to the Holy See. Hilda, it seems, may have conformed to Romanized Christianity, but she still had Wilfrid’s number and may have used her very own iPhone case to call him out on occasion.

Some criticize Hilda’s actions at Whitby. Perhaps if she had lobbied harder, Celtic Christianity would have held 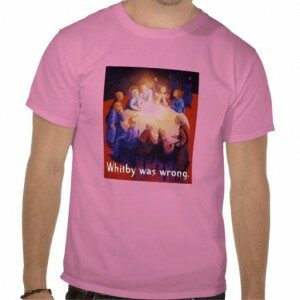 the day and produced a very different Church. Maybe. Maybe not. Hilda, we may surmise, was personally not pleased with the outcome, but she did realize the value of community unity over personal opinion. But one does wonder if, had this nifty shirt been available in the Whitby gift shop, she would have made it part of her regular monastic fashion.

Hilda of Whitby vs. Harriet Tubman

126 comments on “Harriet Tubman vs. Hilda of Whitby”