Thecla vs. Francis of Assisi

And then there were eight. We started with 32 saints and 3/4 of them have been sent packing. Welcome, friends, to the Elate Eight. Things kick off with Thecla taking on Francis of Assisi. To make it to this point, Thecla defeated John Keble and Brendan the Navigator while Francis of Assisi beat John Wycliffe and Cecilia. (Elate Eight Bonus: click on the names of vanquished foes to refresh your memory by reading the write-ups from previous rounds).

Yesterday, Egeria defeated Thomas Ken 54% to 46% to nab the final spot. After today's battle, it's Brigid of Kildare vs. Kamehameha, Bernard Mizeki vs. Molly Brant, and Frederick Douglass vs. Egeria. One of these eight will be awarded the coveted 2015 Golden Halo!

This round is also known as the Saintly Kitsch round. After basic biographies, quotes and quirks, what else could there be? There are always some folks who take offense to this approach — we call them Kitsch Kranks. This round is not meant to belittle or demean our saintly heroes but to have some fun and gaze in wide wonder at the breadth of devotional practice. So kindly relax and enjoy the spirit of the Madness as we push ever onward toward our goal.

Finally, if you want to know more about, and see some examples of, saintly kitsch, tune in to this week's episode of Monday Madness in which Scott and Tim also reveal why Lent Madness is the Original Saintly Smackdown©.

You may anticipate, Lent Madness reader, that Thecla – proclaimed as an “Equal-to-the-Apostles” and honored as a saint since the time of the early church – would be devoid of saintly kitsch. All hope would seem to be lost, especially when paired against Saint Francis, the saint whose face inspired a thousand birdbaths. With Thecla being most highly venerated in Eastern Christianity – a tradition not particularly known for turning its saints into garden gnomes – some kitsch would, it seem, be missing for Thecla in this round of Lent Madness. 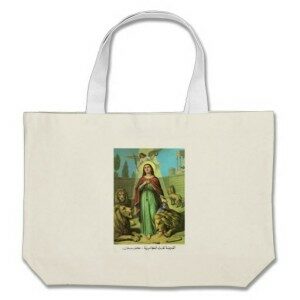 But that, dear friends, is why Zazzle and Etsy exist. Truly, it seems, there is no member of the communion of saints beyond plastering on a tote bag. Thecla, revered for her own self-denial, may have travelled light, following in the footsteps of Saint Paul, but that won’t prevent her from helping you carry home your latest purchases from the supermarket in this sophisticated canvas tote bag.

Yet, something, it seems, is still missing. Thecla was put on trial and condemned for 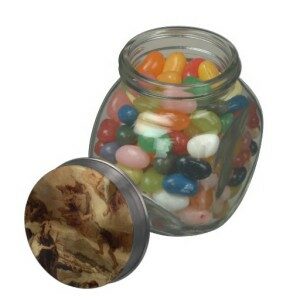 refusing to renounce her faith in Jesus Christ, the true and living bread. Thecla could have tasted death – but was delivered by God each time. While remembering her trials, you, dear reader, can think of the sweetness of God’s deliverance with a free batch of St. Thecla jelly beans! 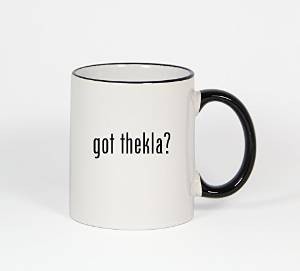 Yet, dear reader, I still sense something missing. Two different cities tried to put Thecla to death for her faith in Jesus Christ. Twice, she was delivered. One can only expect that the rulers of these cities were left asking one another if they “Got Thecla?” as they drank their morning coffee. The answer: no. God always delivered her.

Yet something, it seems, is still missing. The Acts of Paul and Thecla recount wild beasts being struck dead to spare Thecla from martyrdom, but evidently, modern day stuffed beasts haven’t gotten the message. These tigers, bears, horses and moose are big Thecla fans, and want you to vote for her today. They even have the t-shirts to prove it. Talk about rooting against their own self-interest. 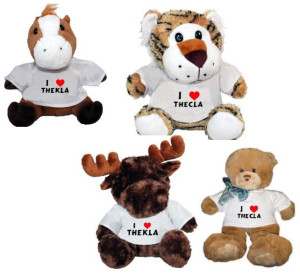 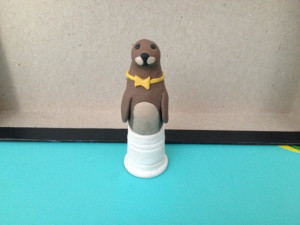 Alas, something, it seems, is still lacking -- one key and memorable piece of Thecla’s story. We become Christians through Holy Baptism, and the words of the liturgy remind us that we through that sacrament, we are “sealed by the Holy Spirit in baptism, and marked as Christ’s own forever.” And, dear reader, we know that Thecla, like few others, can claim to be seal-ed in baptism, since she baptized herself in a pool of water filled with ravenous sea lions and, yes, loose seals. Yet she was baptized, and was not harmed in any way by these wild beasts – the ravenous sea lions and loose seals did not maul, bite, or harm her – instead, she was baptized in water and delivered. Ultimately, no Thecla kitsch round would be complete without a loose seal. And so, we present one to you now, humbly asking for your vote.

Faithful Lent Madness readers, Francis, whose life and ministry preached the Gospel both with and without words, gives us such a rich tapestry of love, faith, and adventures that the kitsch is most certainly strong with this one. Sure, he didn’t hang with someone named Paul in the New Testament, but his feast day ups most average Sunday attendance figures if clergy count the two and four-legged souls in church at the Blessing of the Animals.

After all, not every saint has the gravitas or the holy presence to be the final perfect touch for a garden. This particular birdbath captures Francis in the holy position of orans, blessing the water and birdseed for the very birds who set quite the high standard for a flock listening to a sermon. Squirrels, a lamb, a wolf, and bunnies listen in rapt attention. Bunnies. Bunnies loved this man! 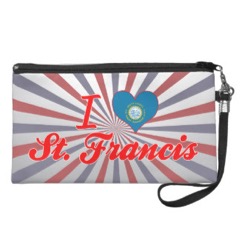 Francis lived a life of extreme poverty and asked his community to do the same. While not all of us are called to a life of holy vows of poverty, we are all called to remember that less is often more. Remember one of the Franciscan rules by downsizing your baggage with this small purse. Emblazoned with a reminder of our favorite saint, it is just roomy enough for essentials, asking us to leave our extra baggage behind. 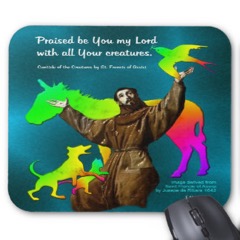 Francis’ legacy includes authoring what many consider the first work of literature written in the Italian language, the stunning Canticle of the Sun. In it, all of Creation praises God. While working at our desks, we can be reminded to stop occasionally and join Creation in praising God with this psychedelic mousepad featuring Francis and a unicorn. Bunnies AND unicorns loved Francis! He surely has their votes. 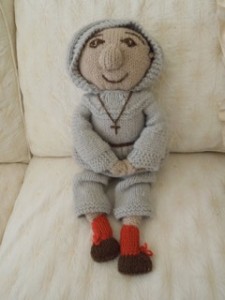 church bigwigs, but Francis just wants us to know that we are all loved. Francis’ compassion and kindness are mentioned with frequency by those who knew him or knew people who knew him. So when you have one of those days where nothing seems to go your way, fix a warm cup of cocoa and snuggle with this St. Francis doll to remind yourself that you, too, are part of God’s beloved creation.

Francis lived a faithful, adventurous life, and the stories of Francis are many. We cannot, however, forget one of his more dramatic encounters, with the Wolf of Gubbio. The ravenous wolf was terrorizing the town, making livestock and citizens the daily lunch specials. The town’s bravest men went to kill the wolf. Armed with their pitchforks and swords, they charged at the wolf, only to become more casualties. The townspeople were terrified of the wolf. They would look out their windows each night and see this. Horror!

Francis, hearing about their plight, took pity upon the townsfolk and the wolf. Francis went to meet the wolf, armed only with his 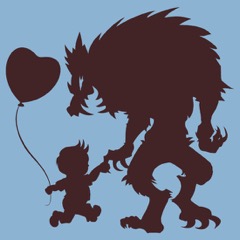 love and faith. The wolf charged at Francis, and Francis responded by making the Sign of the Cross and saying, “Brother Wolf, in the name of Christ, I order you not to hurt anyone.” Guided by Francis, the wolf and the townspeople made peace and lived in harmony.

So, in honor of Francis, who made ravenous wolves hold hands with children and who reminds us that everything can nudge us to remember the love of God, even questionably decorated mousepads, we humbly ask for your vote.

Thecla vs. Francis of Assisi

182 comments on “Thecla vs. Francis of Assisi”