The day after International Women’s Day, we have two international women squaring off in the Lent Dome. Clare of Assisi (Italy!) takes on Vida Dutton Scudder (America!).

To make it thus far, Clare trounced Denis while Vida sailed past F.D. Maurice. Who will make face Constance in the Elate Eight? Only your vote and the next 24 hours will decide.

Yesterday Columba mastered Meister Eckhart 60% to 40 to advance to the next round.

And in the midst of the Saintly Sixteen, the SEC just wanted to offer a quick shout-out to all of our hard-working Celebrity Bloggers. As we get deeper into Lent, the turnaround times for the write-ups gets tighter. This is all being done in real time, folks! So if you spot a harried-looking CB, someone who may also be leading a congregation through Lent, give them a word of encouragement as you ask for their autograph. And then let them get back to their most important and holy task-at-hand. 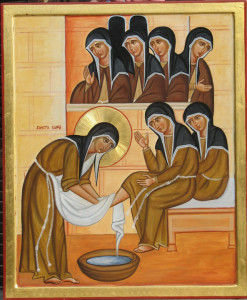 So Clare was that person.

That person so sweet, so devoted, so honest, so deeply and genuinely kind to everyone even the haters can’t hate on her. Her only quirk was her deep goodness and authentic devotion.

Even before she was born, she was that person. While awaiting Clare’s birth, her mother went to a local church daily to pray for safe delivery as the date approached. One day, she heard a response to her prayer: “O Lady, do not be afraid, for you will joyfully bring forth a clear light which will illumine the world.”

Of course, that clear light was born shortly afterwards and named Clare, which means “clear one,” in case you were wondering.

Writings about her life share that even as a child, she was holy and dedicated. One biographer notes she was praised by her neighbors and townspeople for her goodness and compassion and her devotion to daily prayer, even as an infant. As a child, she would take food from her plate to share with the hungry in her town.

Her only recorded act of disobedience was her refusal to marry the man her family selected for her. But since she made her vows, as she later wrote, “to take the Lord Jesus Christ, a spouse of a more noble lineage, who would keep her forever unspotted and unsullied,” even that act of disobedience gets a pass.

Clare spent all of her adult life in the contemplative religious order that would eventually be called the Order of St. Clare. Clare founded her order on deep contemplation of Christ and the purest ideal of Franciscan poverty. None of the women could own anything, and their daily lives reflected a faithful and serious commitment to poverty. For Clare, even her sleeping conditions were bare bones. In the Legend of St. Clare, we read about her sleeping conditions: “for a pillow, she took a block or a great stone; she lay always on the bare ground, or for to take the better her rest she lay otherwhile upon the cuttings of vines, unto the time that Saint Francis had commanded her, because that it was over foul, that she should use to lie on a sack full of straw.”

The vast majority of her writings are from letters to two women who were entering religious life. In her letter supporting Agnes and her decision to join the monastic life that embraces utter poverty, Clare writes:

O blessed poverty,
who bestows eternal riches on those who love and embrace her!
O holy poverty,
to those who possess and desire you God promises the kingdom of heaven
and offers, indeed, eternal glory and blessed life!
O God-centered poverty,
whom the Lord Jesus Christ Who ruled and now rules heaven and earth,
Who spoke and things were made, condescended to embrace before all else!

Clare doesn’t mention the rocks for pillows, but otherwise, her enthusiasm and dedication to Christ is evident.

Clare is even that person for those of us who find respite binge watching House of Cards on Netflix. Yes, she’s the patron saint of television. But instead of House of Cards, Clare watched the Sacrament of the Mass projected by none other than the Holy Spirit on the wall of her room when she became too ill to attend.

Yes, she was that person who loved and served the Lord with her whole self and soul. She guides the sisters of her order: “Love him totally who gave himself totally for your love.”

We truly need more of those people like Clare. 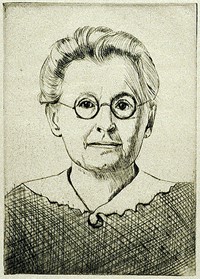 The more you learn about Vida Dutton Scudder, the more it is clear that her quiet influence and deep commitments touched many aspects of society throughout the last century and into the current one.

Vida was an educator, Episcopalian, editor/writer, principal advocate in social and women’s issues, social worker, welfare activist, anti-war/pro-peace proponent, and one of the most prominent lesbian writers of her time. She maintained that charity by and of itself is a failure; rather, an economic solution was the only avenue to effectively address social problems.

Her prolific writings were truly the window into her deeply Christian soul and provided an outpouring for her beliefs. Honored annually on October 10, Vida’s quotes mirror her life’s work, social beliefs and stances:

“War to win peace is at best a dangerously illogical method.”

“The suppression of war is not the equivalent of peace.”

“Luxury, like a minimum wage, is a relationship; it changes as we change.”

“Reality, like beauty, is in relationship and there only.”

“It is through creating, not possessing, that life is revealed.”

“An element of abstention, of restraint, must enter into all finer joys.”

“The worst danger of the mystic is as always a quest of spiritual privilege leading to aloofness from the common lot.”

“If prayer is the deep secret creative force that Jesus tells us it is, we should be very busy with it.”

“Economic necessity is the determining base of permanent social change”

“Social intercession may be the mightiest force in the world.”

Living her beliefs was a strong part of Vida’s lifelong dedication and education.  She was an early member of the Society of the Companions of the Holy Cross (SCHC), comprised of lay and ordained Episcopal and Anglican women who are dedicated to a life of prayer for social justice, unity, peace and reconciliation.

Some interesting notes and tidbits about Vida and those around her:

Vida Dutton Scudder lived from 1861 to 1954, bridging historic times that cried out for, and desperately needed, her social conscience, personal drive, and intense spirituality.