Today two powerful, trail-blazing women face off as Sojourner Truth takes on Frances Joseph-Gaudet. In the first round, Sojourner made quick work of Soren Kierkegaard while Frances defeated John Mason Neale. The winner of this epic battle will face Absalom Jones in the Elate Eight.

Let's just state from the outset that, no, you can't vote for both. And abstaining only makes you come off as indecisive. So, read, revel in their respective accomplishments, and then vote! 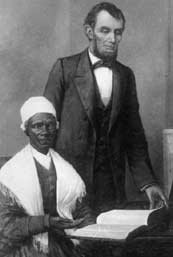 Sojourner Truth was a preacher, activist, and all-around freedom fighter in the mid-19th century.

Her famous “Ain’t I a Woman?” speech was given in Akron, Ohio in 1851. It was extemporaneous, because she couldn’t read or write, and contemporary accounts vary wildly. “I can't read, but I can hear. I have heard the Bible and have learned that Eve caused man to sin. Well, if woman upset the world, do give her a chance to set it right side up again.” The phrase “ain’t I a woman?” never appeared in accounts of what she said until years later. That phrase appears to have sprung from the pens of the White journalists who were playing on popular assumptions of how Southern, uneducated slaves spoke. However, Sojourner herself grew up speaking exclusively Dutch in New York. From all other accounts of her speaking, she spoke impeccable English with no Southern accent, so she more than likely never used that particular phrase.

She was an incredibly popular preacher. She spoke on her unique biblical interpretations based on her life experiences--something most White audiences had never heard. “Children, who made your skin white? Was it not God? Who made mine black? Was it not the same God? Am I to blame, therefore, because my skin is black? Does it not cast a reproach on our Maker to despise a part of His children, because He has been pleased to give them a black skin? Indeed, children, it does; and your teachers ought to tell you so, and root up, if possible, the great sin of prejudice against color from your minds....

Does not God love colored children as well as white children? And did not the same Savior die to save the one as well as the other? If so, white children must know that if they go to Heaven, they must go there without their prejudice against color, for in Heaven black and white are one in the love of Jesus. "

A big part of this popularity was her dry wit. In an unidentified speech, she had a good time commenting on the fancy clothes of fellow women’s rights activists. “I'm awful hard on dress, you know. Women, you forget that you are the mothers of creation; you forget that your sons were cut off like grass by the war, and that the land was covered by their blood; you rig yourselves up in panniers and Grecian bend-backs and flummeries; yes and mothers and gray-haired grandmothers wear highheeled shoes and humps on their heads, and put them on their babies, and stuff them out so that they keel over when the wind blows.”

Buoyed by a prophetic voice, and a healthy sprinkling of humor, Sojourner spoke truth to power throughout the country at a pivotal time in history. 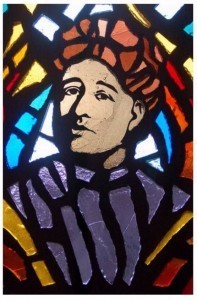 CONGRATULATIONS! You have won an all expense cyber-tour of the life and times of Frances Joseph-Gaudet: educator, activist, and reformer. On your cyber-tour, you will have an all-inclusive experience at locations across the globe.

Day 1:  You will travel to a log cabin in Holmesville, MS where you will experience where Frances was born to a Native American mother, and an indentured slave for a father.

Day 2:  From Mississippi, you will travel to New Orleans, LA to see Frances' next home with her grandparents. We will take a tour of the site of Straight College where Frances attended university on beautiful Canal Street in New Orleans. While downtown, we will mosey on over to St. Luke's Episcopal Church to enjoy the beauty of this worship space that houses a stained glass of Frances, and where the parish hall is dedicated in her honor. St. Luke's is Frances' national shrine. From St. Luke's we will take a tour of the Episcopal Diocese of Louisiana where your church can apply for the "Gaudet Community Grant" for community endeavors that creates educational opportunities for African American children. Frances' gift of education continues to give to this day.

Day 3:  We will hop on a PLANE for Scotland! Yes, you will get to go to Scotland to experience the Women's Christian Temperance Union convention in Edinburgh where Frances assumed responsibility for young blacks convicted of misdemeanor and vagrancy. We will continue our trip abroad through London, Paris, and Belfast as Frances continues her global advocacy.

Day 4:  We will return to Louisiana where we will tour the Gaudet Normal and Industrial School, now known as the Gaudet Episcopal Home for orphans. While the home is no longer in active use, you can still apply for scholarships and other endowments through Frances' generosity. If time permits, we will tour the 22 prisons that Frances visited in her life.

Day 5:  From Louisiana, we will head to Middletown, RI to see Gaudet Middle School, the middle school attended by this blogger as proof that God has divine plans and intersections. Frances was a part of my life before I knew it.

Day 6: From Rhode Island, we will travel to Chicago, Illinois to the final resting place of Frances. Frances summed up her life by saying, "the hope that when our women read of this my mission, they may become inspired to do what they can in the same way."

You will experience poverty, international travel, education, incarceration and adoption on this journey of Frances Joseph-Gaudet. You will not be bored.