Stephen vs. Augustine of Canterbury

And then there were eight. We started with 32 saints and 3/4 of them have been sent packing. Welcome, friends, to the Elate Eight.

Who remains? Well, after Amelia Bloomer made it past Fanny Crosby yesterday 59% to 41%, she will join Stephen, Augustine of Canterbury, Franz Jägerstätter, Mechtild of Magdeburg, Raymond Nonnatus, Martin Luther, and Florence Nightingale. One of these remaining eight will be awarded the coveted 2017 Golden Halo!

Things kick off with two heavyweights of the faith as Stephen takes on Augustine of Canterbury. Yes, it’s the Church’s Protomartyr vs. the Apostle to the English. To make it to this point Stephen defeated Alban and Henry Budd while Augustine took down Augustine of Hippo and Scholastica. Don't forget to click the Bracket tab and scroll down to be reminded of what was written about these two in the earlier rounds.

The Elate Eight is also known as the round of Saintly Kitsch. After basic biographies, quirks and quotes, what else could there be? Now, there are always some folks who take offense to this approach — we call them Kitsch Kranks. Please remember that this round is not meant to belittle or demean our saintly heroes but to have some fun and gaze in wide wonder at the breadth of devotional practice. So kindly relax and enjoy the spirit of the Madness as we push ever onward toward our goal.

Finally, if you want to know more about, and see some examples of, saintly kitsch, tune in to this week’s episode of Monday Madness in which Tim and Scott reveal the Great Shema of Lent Madness (along with cameos by George T. Dog and 150 seventh grade boys from BC High in Boston). 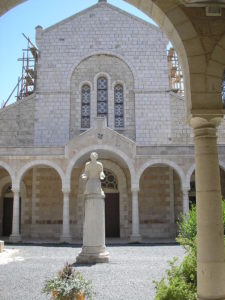 You could start that the beginning of his story, and worship at the place of his martyrd 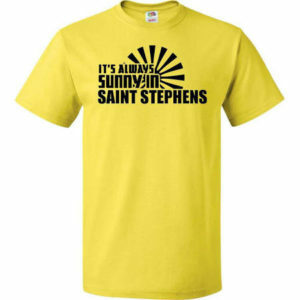 But perhaps even the place where you live is named in honor of Stephen – is a town "kitsch?" Perhaps, once you consider all the kitsch associated with life together in a town. You could attend St. Stephen’s College (in St. Stephen’s, New Brunswick), or just generally think St. Stephen is a great place (and protomartyr). 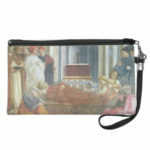 Of course, you will need a little special something to go with your new shirt – perhaps a purse depicting the funeral of Saint Stephen? You could always use it to carry around pebbles and small stones that you find – just in case. Or maybe you just want to keep some candy around to munch on later. 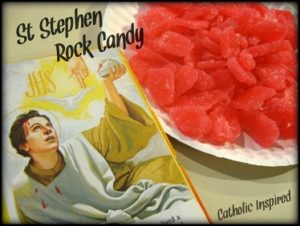 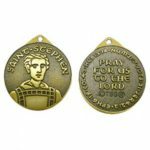 As long as you are accessorizing, pick yourself up a small broach. You could choose a simple Saint Stephen medallion. But if you are looking for something fancier, you can’t go wrong with the badges and insignia of either of the two royal / military orders of Saint Stephen – it make it easier to get your hands on one if you are either a Duke of Tuscany or Hungarian royalty. Just don’t make a wrong turn, or you will end up with one of these fancy pins dedicated to St. Steve (Buscemi). 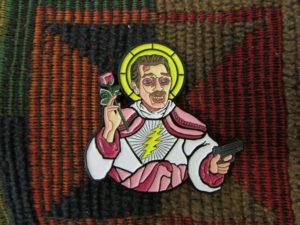 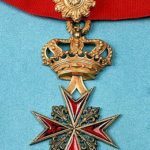 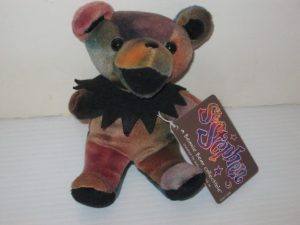 When you get home at the end of a long day of serving others, relax by playing with this Stephen doll. You can re-enact his preaching, or bury him under some stones in a sandbox. While unwinding, throw on some music – perhaps the Grateful Dead song, “St. Stephen” which the band has said was inspired by the first century martyr (following his death, Jerry Garcia’s funeral was even held in one of those many “St. Stephen” churches). 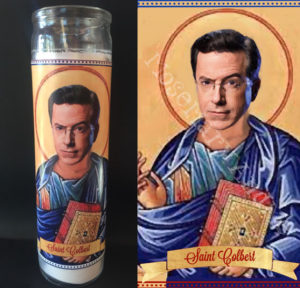 As you say your evening prayers for the forgiveness of those who have wronged you, light a candle. Then cuddle up to your Saint Stephen Beanie Bear and sleep soundly, trusting as Stephen did in God’s watchful care.

How important is St. Augustine of Canterbury to Christianity? Based on the amount and types of items available for viewing, purchasing, wearing and reading, it is simple to witness and judge the depth of his importance, the expanse of his influence, and the widespread use of his name and image.

He is depicted in many mediums and in so many ways

There are many books…and statues...and icons... 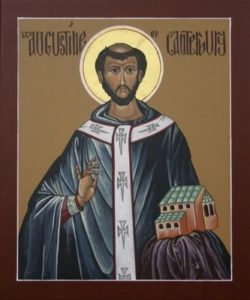 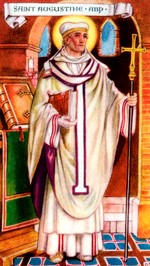 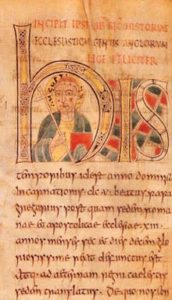 Granted, none of this really qualifies as true saintly kitsch. Fortunately, Augustine fans, all is not in vain. We'll start 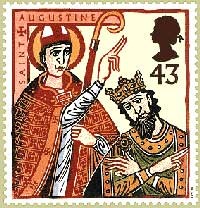 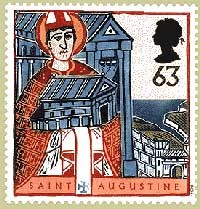 slowly with postage stamps. Not exactly kitsch, but pretty great!

Thirsty? Drink your favorite hot beverage out of this Augustine icon mug.

Or, if wearing your Augustine pride is more your speed, 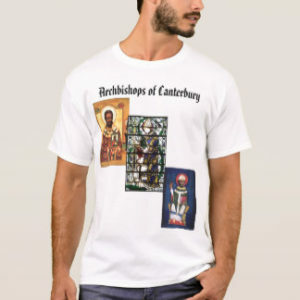 why not don this t-shirt that also includes two other Archbishops of Canterbury thrown in for no extra charge?

Or this cartoonish Augustine the kids will love? 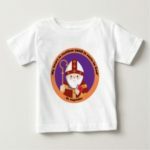 You can also show your Augustine affinity by wearing buttons. Lots and lots of 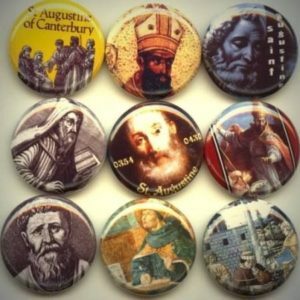 buttons. On all your lapels. For an entire week. Or on your hat. 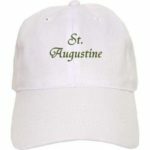 Finally, you can visit the untold number of churches, abbeys, cathedrals, missions and prayer stations named for Augustine of Canterbury worldwide. Like St. Augustine's Abbey in Canterbury itself.

There are just so many choices among the myriad ways to remember Augustine of Canterbury -- reading, wearing, viewing, posting, mailing, sipping or visiting.

Stephen vs. Augustine of Canterbury

208 comments on “Stephen vs. Augustine of Canterbury”