Today in the Saintly Smackdown©, Martin de Porres faces Dymphna, as we move between 17th century Peru and 7th century Belgium. To get to the Saintly Sixteen, Martin eased past John of Beverley while Dympha defeated Gertrude of Nivelles.

Yesterday, Phocas the Gardener took down Katharina von Bora 60% to 40% to advance to the Elate Eight against Richard Hooker. This marks the second year in a row that a member of the Luther Family will not win the Golden Halo. Last year, Katharina's husband, some guy named Martin, made it to the Faithful Four before running into the Florence Nightingale juggernaut.

It's hard to believe but the last battle of the Saintly Sixteen will take place on Monday as Eglantyne Jebb faces Catherine Winkworth. Then it's on to the Elate Eight! Enjoy today's vote and we'll see you first thing Monday morning. 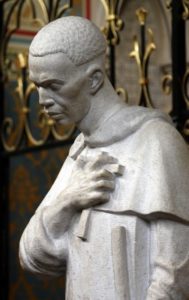 St. Martin de Porres treated all with respect, even when he wasn’t respected in return. He was tireless in his ministry, even when his efforts were questioned and thwarted. He touched many souls, resulting in a long list of patronages in his name.

Illegitimate and the son of a freed slave, Martin refused to let obstacles stop him from his social work. He ministered to the sick, whether nobles or slaves, young or old, rich or destitute, educated or illiterate. After being chastised for caring for an old, dirty, ulcerated beggar, Martin remarked, "Compassion, my dear Brother, is preferable to cleanliness."

Another reprimand from the prior happened for ministering to a poor, bleeding Indian. Martin’s retort: "Forgive my error, and please instruct me, for I did not know that the precept of obedience took precedence over that of charity."

A miracle often attributed to Martin occurred during an epidemic. He evidently passed through locked doors to care for the sick in all areas of the facility, with friars suddenly seeing Martin appear next to them. He was also known to offer instant cures to the sick, and to be surrounded by bright light when he prayed.

Martin established orphanages and a hospital for poor children of the slums. He cared for non-humans, too – founding a shelter for stray and sick cats and dogs.

He is known by many names: Martín de Porres Velázquez; St. Martin of Charity; St. Martin the Charitable; the first Black Saint from the Americas; and Saint of the Broom (because no chore, no task, was beneath him).

He hung around with some cool friends who gained fame and notoriety on their own: St. Juan Macías and St. Rose of Lima.

At his viewing, so many sought a relic that his habit was clipped in small pieces, causing three habits to be taken from his body. Reportedly, 25 years after his death, his body was exhumed and was still intact, smelling splendidly.

In artwork, he is often depicted wearing the Dominican lay brother habit with a broom, sometimes with a dog, a cat and a mouse peacefully gathered around the same food dish.

Saint Dymphna has been patroness and brought comfort to those who suffer with mental illness for more than a millennium. She remains actively venerated to this day and is perhaps especially appreciated by those who have felt stigmatized by their diseases. From bipolar disorder to anxiety to the trauma of incest, people pray to her and wear her medal in hopes of intercession. As a renowned beauty, she is a favorite subject of artists.

Princess and daughter to a petty Irish king, Dymphna was baptized along with her mother and dedicated herself as a bride of Christ at the age of fourteen. When her mother died shortly after, her father Damon suffered a mental decline. He sent his servants to find someone as beautiful to replace his wife, but no one could be found.

Accounts are unclear about what caused King Damon to set his sights on marrying his daughter. Some traditions suggest he was advised by evil counselors, others that he confused Dymphna with her mother, and still others that he was unable to resist strange thoughts that entered his head.

Dymphna fled his incestuous plans with her priest, two servants, and the fool from her father’s court. The party took refuge in Geel, Belgium. Several religious hermits lived in the village at that time. Using her father’s money, Dymphna founded a hospital for those who, like him, suffered from mental illness. This action illuminates her compassion both for her distraught father and for those who, like her, had experienced the trauma or grief of a loved one’s mental decline.

Tragically, it was through the expenditure of his money that King Damon was able to trace his daughter to Geel. When she refused to marry him, he murdered her priest, then decapitated her. After she was martyred, her remains were buried in a cave near Geel. Later they were moved to a silver reliquary, however the Church of St. Dymphna still stands on her original burial site. Her relics are associated with the healing of both epilepsy and mental illness. Some of her remains can also be found at the Shrine to Saint Dymphna in the United States (Ohio).

However, Dymphna’s greatest legacy remains the tradition in Geel of compassion to those who suffer from mental illness. Born of her own suffering, her seventh century act of mercy created this culture of care. As pilgrims seeking healing flocked to the town in the middle ages, the Church of St. Dymphna overflowed. So following her example, the townspeople welcomed the afflicted into their own homes, treating them not as patients but family. To this day, the citizens of Geel still do so, opening their homes for weeks or months at a time. Some visitors take refuge in Geel as Dymphna once did and stay their entire lives, finding acceptance and peace thanks to her holy witness.