The Quotes and Quirks of the Saintly Sixteen continue as Phocas the Gardener faces Katharina von Bora. To make it to this round, Phocas defeated Isidore the Farmer while Katharina took down Wulfstan. Today's winner will face Richard Hooker.

Don't forget, the Saintly Sixteen write-ups are not the sum of what has been shared about each saint by our Celebrity Bloggers. Click the links above or scroll down on the bracket page to supplement your knowledge of our daily contestants.

Yesterday, the great controversy surrounding whether or not it was "fair" to stick an angel in the bracket was decided as Esther soundly dismantled Michael the Archangel 70% to 30%. This sets up the first Elate Eight matchup, a sure-to-be epic battle between Peter and Esther. Now go vote! 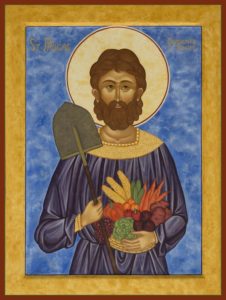 It is no surprise that Phocas the Gardener is best known for his eponymous horticultural habits. Phocas’ garden, near the Black Sea city of Sinope, provided food to the poor and hospitality to strangers, including to the strangers at whose hands he would ultimately be martyred during the Diocletian persecution. In writing Lives of the Saints, Alban Butler praised Phocas, saying he was one who “join[ed] prayer with his labor, [and] found in his garden an instructive book and an inexhaustible fund of meditation. His house was open to strangers and travelers who had no lodging in the place; and after having for many years liberally bestowed the fruit of his labor on the poor, he was found worthy also to give his life for Christ.” Yet Phocas’ legend is not limited to his garden.

Phocas’ name appears to come from the Greek phoke, meaning “seal” (as in the lovable seafaring mammal, and, alas, not the British singer or a wax signet affixed to paper). It is speculated that his common name with the lovable sea mammal, along with a life and ministry lived near a major port, gave rise to his patronage of sailors, mariners, and watermen. A reference by Asterius of Amasea in the year 400 refers to hymns sung in Phocas’ honor by sailors in the Euxine, Aegean, and Adriatic seas.

It is perhaps around this time that a unique custom arose among some sailors in honor of St. Phocas. It became customary that for each meal, a portion would be designated for Phocas, which would be purchased by one of the voyagers or sailors. The cost of the meal would be left with the ship’s captain, and, upon arriving into port, the money from Phocas’ portion would be given to the poor.

Remembered and venerated for his patronage of gardeners, farmers, providers of hospitality, and sailors, Phocas’ witness of faithful generosity to the vulnerable and powerful alike paints a vivid picture of answering the call given to all Christians to love our neighbors as ourselves. 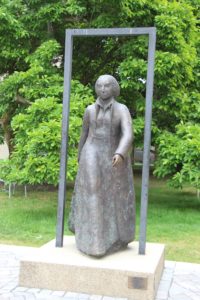 Unlike many of the women who played a role in the Protestant Reformation — or many of the saints who appear in Lent Madness — Katharina von Bora’s primary vocation was not ministry.

Rather, biographer Ruth A. Tucker notes, von Bora was “a farmer and a brewer with a boarding house the size of a Holiday Inn. All that with a large family and nursing responsibilities.” And yet, Tucker writes, the former nun was “the most indispensable figure of the Reformation, save for Martin Luther himself.”

(She was, of course, also the wife of the surly Reformer, which many have quipped should be enough to win her sainthood.)

It’s perhaps fitting that while few of von Bora’s quotes have survived, what letters remain are all business. Most plead with Luther’s benefactors to continue their support for her family after her husband’s death.

Nevertheless, several of her quips have persisted in letters written by Luther, in his “Table Talk” and in other contemporary accounts.

One of the most endearing comes after Luther tried to bribe von Bora to read through the Bible in a year, still a popular undertaking by many Christians. Her response, after having lived behind convent walls for nearly two decades: “I’ve read enough, I’ve heard enough, I know enough. Would to God I lived it.”

Evidently, she knew more than enough. Luther elsewhere said in his typically colorful language that his wife knew the Psalms “better than ever the papists had done.”

And in response to a joke from Luther about taking more than one wife, von Bora reportedly said, “I’d rather go back to the convent”.

Perhaps the biggest celebration of Katharina von Bora also has little to do with ministry: Thousands of people gather each summer in Wittenberg, Germany, for a quirky weekend festival that celebrates not the couple’s role in the Reformation, but their wedding. During “Luthers Hochzeit,” or “Luther’s Wedding,” performers dress as Luther, von Bora and 16th century wedding guests and parade through the streets — a far more elaborate affair than the couple’s actual wedding, which took place within a day of Luther’s proposal.

113 comments on “Phocas the Gardener vs. Katharina von Bora”