James the Greater vs. Nicodemus

After a day in which two ascetics battled it out in the wilderness, John Chrysostom emerged victorious over Margaret of Cortona 53% to 47% -- despite a late push by Margaret -- to advance to the Saintly Sixteen. He'll face the winner of Mellitus vs. Ephrem of Nisibis.

Today we return to the Biblical quadrant of the bracket as James the Greater faces Nicodemus. For those who followed the Supreme Executive Committee's shenanigans at last summer's Lent Madness Day at General Convention in Austin, Texas, you'll recall this included a play-in match between James the Great and James the Less. Perhaps not surprisingly, the Greater lived up to his name, leaving the Lesser to wallow in saintly ignominy.

Finally, in case you missed yesterday's edition of Monday Madness, for which you should do some serious penance, you can still catch it here. 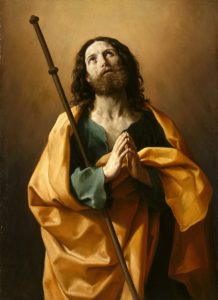 James the Greater is the portrait of an imperfect saint. He is often known as “the Greater” to distinguish him from the other Jameses in the Bible. The moniker denotes his prominence in the early tradition, not his superiority over other like-named disciples and saints Jameses.

James is the older brother of John. They are fishermen with their father Zebedee until Jesus calls them to follow him. James is given a special place in the gospels as an early follower of Jesus and as one who is given special access. He, along with Peter and John, is one of the few witnesses to the raising of Jairus’s daughter (Mark 5:35-43), the Transfiguration (Mark 9:2-9), and Jesus’ agony in the Garden of Gethsemane (Mark 14:32-42).

In spite of this privileged place, James often exhibits weakness and lack of insight. His all-too-human responses give us hope. He and his brother are called “Sons of Thunder,” presumably because of their impetuousness. (Later hagiographers, that is, those who write about the lives of the saints, say the brothers were given the name for their thunderous—and effective—preaching.) In the Gospel of Luke, when a Samaritan village does not welcome Jesus, James and John ask if they should call fire from heaven to consume the village (Luke 9:51-56). James, with Peter and John, doesn’t understand the Transfiguration. He falls asleep while Jesus agonizes in the Garden. When Jesus tells his followers he must be rejected, condemned to death, mocked, and crucified, James and John reply by asking if they can be seated at his right and left hand in power (see Mark 10:32-40). According to Mark, James flees the crucifixion scene.

In the gospel tradition, James’s name always precedes John’s. Curiously, once Luke begins to tell his tale in Acts, James disappears while Peter and John act as the most prominent leaders of the nascent movement. This is perhaps because James, as one of the first martyrs for the Jesus movement, was killed by Herod in the early 40s (see Acts 12:2). In a story recounted by Clement of Alexandria, James’s defense before Herod was so effective that the guard who was charged with watching him was converted and the two were killed together.

Collect for James the Greater
O Gracious God, we remember before you today your servant and apostle James, first among the Twelve to suffer martyrdom for the Name of Jesus Christ; and we pray that you will pour out upon the leaders of your Church that spirit of self-denying service by which alone they may have true authority among your people; through Jesus Christ our Lord, who lives and reigns with you and the Holy Spirit, one God, now and for ever. Amen. 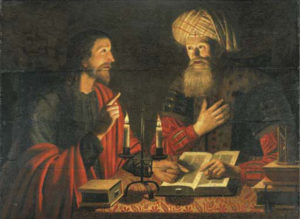 Canonical material from which to pull a full biography of Nicodemus is limited. Nicodemus only appears in the Gospel of John and even then, only three times. The first time ol’ Nick appears in the gospel is when he comes to Jesus to ask him about his teachings. John describes Nicodemus as “a Pharisee…a leader of the Jews.” Nicodemus seems stumped by Jesus’ idea that one must be “born again” in order to inherit the kingdom of God. Through this exchange, which lasts for twenty-one verses, Jesus and Nicodemus exchange maxims, teachings, and the occasional sass before Jesus offers a more fulsome exploration of his work in the world. “For God so loved the world that he gave his only Son, so that everyone who believes in him may not perish but may have eternal life.” We aren’t told whether or not Nicodemus is persuaded.

Nicodemus appears again several chapters later when the Sanhedrin discuss how to arrest Jesus for blasphemy and disturbing the peace. Nicodemus chimes in, advocating that Jewish law does not permit judgment before one is given a trial. His defense of Jesus prompts some on the council to suggest that Nicodemus might be one of Jesus’ followers. Again, Nicodemus’ response is not recorded.

The final time Nicodemus appears in John is during our Lord’s crucifixion. After Jesus has died, Joseph of Arimathea and Nicodemus come to remove the body of Jesus, prepare it for burial, and place it in Joseph’s tomb. Nicodemus brings “a mixture of myrrh and aloes, weighing about a hundred pounds” and with Joseph, wraps the body of Jesus “with the spices in linen cloths” (John 19:39-40). Again, Nicodemus never makes a verbal confession of belief but what can be deduced from his actions, particularly his care and attention to the body of Jesus, is that Nicodemus was convinced of and converted by the message of Jesus. He uses his incredible wealth to bury Jesus in royal fashion. Although Nicodemus follows Jesus as a clandestine disciple, his life is changed by a chance encounter.

Collect for Nicodemus
Almighty God, you gave to your servant Nicodemus special gifts of grace to understand and teach the truth as it is in Christ Jesus: Grant that by this teaching we may know you, the one true God, and Jesus Christ whom you have sent; who lives and reigns with you and the Holy Spirit, one God, for ever and ever. Amen.

James the Greater vs. Nicodemus

191 comments on “James the Greater vs. Nicodemus”