Martha of Bethany vs. Nicodemus

Welcome to the Saintly Sixteen! From 32 saints we have narrowed the field to 16. For this round, rather than the basic biographical information we enter the realm of Quirks and Quotes. Our brilliant Celebrity Bloggers will provide unusual information or legends surrounding their saints along with quotes either by or about their saints.

In yesterday's Santa vs. Rudolph Showdown, okay Beatdown, Nicholas of Myra trounced Rudolph of Gubbio by the historic margin of 92% to 8%. Yes, the bracketologists have diligently researched this topic and determined that this has indeed surpassed the previous largest margin of victory. That was just last year when Maria Skobtsova, the Russian Nazi-fighting nun, defeated Quiteria, the early Christian nonuplet warrior 91% to 9%

The Saintly Sixteen gets started with a Biblical battle between Martha of Bethany and Nicodemus. At stake? The very first spot in the Elate Eight. Let's get to it. 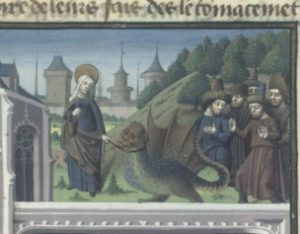 Who was Martha of Bethany? Domestic busybody and foil for her enlightened sister or Daenerys-Targaryen-like tamer of dragons and symbol of female power? Perhaps the medieval biographer Pseudo-Marcilia said it best. In her life, “Martha chose to perform her own ministry, which pleased God greatly.”

Little is known of Martha beyond her portrayal in Luke as the counterpart to her sister. Thanks to early church fathers like Origen and Augustine, the sisters became symbols of classical dualism--Martha, with her earthly concerns as a hostess and Mary, the contemplative. However, she is also a theologian in the Biblical text, confessing her faith in Jesus as a savior in John the same way Peter does in the Synoptics. For this reason, contemporary Biblical scholars see Martha as one of the disciples in Jesus’ inner circle. She has this role in the gnostic gospel Pistis Sophia, where she and other female disciples receive knowledge of the highest mysteries from the resurrected Jesus.

Martha took on an increasingly important role in the middle ages when legend credits her with many fascinating miracles that range from the Christlike to the bizarre. Once a boy drowned in a river across which he was swimming in an attempt to hear her preach, and Martha brought him back to life. Like the perfect hostess she was, she is also credited with changing water into wine at a banquet in her honor. Another legend tells that Martha knew the date of her death and eight days before it arrived she had a vision of her sister Mary’s soul ascending to heaven, held aloft by choirs of angels. After she died, Bishop Fronto of Périgueux fell asleep during a mass at his church and was miraculously carried to Tarascón to officiate over Martha’s funeral.

Devotion to Martha through the middle ages led to an evolving view of her, one where her life of austerity and service reconciled the dualism the early church ascribed to her and Mary. She was seen as an exemplar of both actio and contemplio, two complementary ways of being, both dependent on the other. In this wholeness, Martha becomes a symbol of the church, where spiritual insight fuels worldly service to others.

For this reason, in the church dedicated to her in Tarascón, she is shown with a dragon at her feet. The symbolism is not merely of the miracle attributed to her--the salvation of the town from the Tirascurus, a huge half animal/half fish beast. Martha is shown as the Apocalyptic Woman (Revelation 12), a multi-faceted symbol of female power associated with the Church, and the Virgin Mary, women who confront evil serpents and become a new Eve to partner with Christ the new Adam, and through their active work and generative power help transform the earth into the new creation. 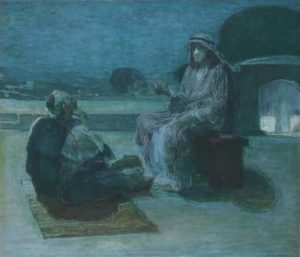 Nicodemus appears three times in scripture. Once to hear Jesus’ teaching by night (John 3:1-21), then as a member of the Sanhedrin who suggests that the accused deserved a trial before judgment (John 7:5-51), and finally at the Crucifixion where he not only provides the spices for embalming the dead body of our Lord, but also to assist Joseph of Arimathea in burying his body (John 19:39-42). There is scant, canonical material that suggests he said much of anything at all.

He has an entire gospel attributed to him and perhaps some of the most interesting parts of the Gospel of Nicodemus are where he describes the Harrowing of Hell. Just before Jesus arrives at Hell’s Gates, Satan, the Prince of Death, has an argument with Beelzebul, the Prince of Hell, about just who Jesus is. They keep going back and forth, arguing about whether he’s actually powerful or not, until suddenly “there was a voice as of thunder and the rushing of winds, saying, Lift up your gates, O ye princes; and be ye lift up, O everlasting gates, and the King of Glory shall come in.” Jesus really knows how to make an entrance. The Prince of Hell then tells Satan to leave unless he is powerful enough to fight the “King of Glory” (Satan leaves), and then Beelzebul instructs his hellions to bar the gates.

Upon hearing the voice announcing the coming of Christ, the dead begin to revolt, yelling at the Prince of Hell “Open thy gates that the King of Glory may come in.” David, Isaiah, and other prophets and prominent Hebrew Bible figures begin reciting their prophecies of the coming Messiah. After again refusing to open the Gates of Hell, the Prince of Hell falls right into the trap of asking “who is this King of Glory?” King David responds with “the Lord strong and powerful, the Lord mighty in battle: he is the King of Glory” and just then Jesus “appeared in the form of a man, and enlightened those places which had ever before been in darkness, And broke asunder the fetters which before could not be broken; and with his invincible power visited those who sat in the deep darkness by iniquity, and the shadow of death by sin.” Jesus then proceeds to lay the holy smackdown in Hell and leaves with the souls of the righteous.

Martha of Bethany vs. Nicodemus

124 comments on “Martha of Bethany vs. Nicodemus”