Our trek into saintly Quirks and Quotes continues with Meister Eckhart taking on Columba. To make it to the Saintly Sixteen Eckhart somehow managed to defeat Drogo, the patron saint of coffee, while Columba snuck past Kateri Tekakwitha in the closest encounter (of the saintly kind) of Lent Madness 2016.

Don't forget, especially if you're just getting started in Lent Madness, that links to all the previous battles are available on the Bracket page (scroll down). In other words, what you read in this round isn't all that has been written about our saints. You can read the initial bios in additional to these write-ups and make a fully informed decision. To make this as user friendly as possible, you can even click the links in the first paragraph above to revisit the first round matchups of both Meister Eckhart and Columba. Yes, throughout Lent, the Supreme Executive Committee continues to lose sleep on your behalf.

Yesterday, Albert Schweitzer made it past Methodius 56% to 44% to claim his spot in the Elate Eight. He'll face the winner of Roch vs. Julian of Norwich.

And in case you missed yesterday's edition of Monday Madness, you can watch it here. Learn how to submit your Mug Shot (and view several examples) to have a crack at winning St. Francis of Assisi! 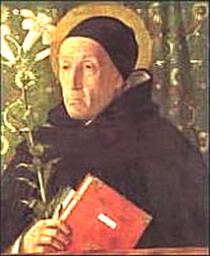 “The eye, with which I see God, is the same eye with which God sees me; my eye and God’s eye are only one eye and one seeing and one knowing and one love.”

Eckhart received his formal schooling from the University of Paris, the greatest institution of higher education in late 13th century Europe. However, Eckhart’s work of preaching and providing spiritual counsel to the Dominican nuns of Saxony was not a one-way street; his informal education came from the women whom he conversed with on spiritual matters, and his writings show a familiarity with the mystical mothers of the Rhineland including Hadewijch and Mechtild of Magdeburg.

In summing up his own preaching, Eckhart said that everything he taught was a variation on four intertwined themes:

“When I preach, I am careful to speak about detachment and that a person should become free of self and of all things. Secondly, that one should be reformed in the simple good that is God. Thirdly, that one should think of the great nobility which God has placed in the soul, so that a person can thereby come to God in a wonderful way. Fourthly, concerning the purity of divine nature—there is such brilliance in it that it is inexpressible!”

Basically, Eckhart is saying that through humility, love, and discernment, believers are able to break through their own distracting notions and ideas about both God and the self (that’s what he means by being “free of self and all things”) to discover that God and the soul are—by nature—at one.

As one aspect of this teaching, Eckhart insists that creation and incarnation should be understood as two sides of the same coin, and uses the image of a dance of sorts: “The Father speaks the Son always, in unity, and pours out in him all created things. They are all called to return into whence they have flowed out. All their life and being is a calling and a hastening back to God from whom they have issued.”

While his Dominican superiors approved of his teaching, the Archbishop of Cologne and later the pope condemned Eckhart’s writings after his death based on excerpts taken out of context. The charges focused around technical statements suggesting some aspects of the soul were uncreated, that Eckhart failed to draw a sharp enough distinction between Creator and creature. His defenders argue that the context of his works provide assurances of his orthodoxy, and Eckhart himself declared that he had no intention of teaching anything contrary to the faith.

With that, Eckhart himself receives the last word: “He who lives in the goodness of his nature lives in God’s love; and love has no why.” 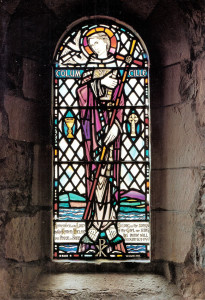 the founder of the abbey at Iona--the center of Celtic Christian activity through the Middle Ages and beyond. According to several sources, Columba was initially baptized Crimthan, which means "The Fox." However, as he grew up, his patient and loving demeanor didn’t fit his name, so he was renamed Columba, which means "The Dove." Despite his name change, Columba cut an arresting figure: “He was a striking figure of great stature and powerful build, with a loud, melodious voice which could be heard from one hilltop to another.”

The two battles that he was involved in really did pain him. It was Columba himself who suggested his exile to Scotland to the council of monks--vowing that he would go forth and convert all the world in order to make penance for those he had hurt, and never again see Ireland. He chose Iona as a settling place because it had no view of the Irish coast, as opposed to the first island where he landed.

From Iona, he traveled all over Scotland, and his missionary efforts included people and monsters. Apparently, in August of 565, Columba was wandering around the Highlands and came up to the River Ness. He noticed some Pict men dragging the body of a man out of the lake. The man had fallen out of his boat and been chomped by Nessie. The people on the shore had cast out fishing lines to bring back the body. Columba, unperturbed, asked someone to swim across the lake and retrieve the boat so he could cross the river. Lugne Moncumin (one of the men) quickly stripped and dove in the water.

As he was swimming across, he woke up Nessie again, and she charged at him, ready to chow down a second time. Columba raised his arm and rebuked the sea monster in the name of the crucified Christ, while making the sign of the cross. He said, "You will come no further. Go back! Do not touch this man!" At once, the monster receded. "Quicker than if pulled down by ropes" writes Columba’s biographer. The Picts were amazed and impressed.

Lugne retrieved the boat unharmed. And everyone, including Nessie, became Christian. Apparently, this story in Columba’s biography has been used extensively by crypto-zoologists in the search for the Loch Ness monster.)

He did return to Ireland once, in 575 CE, in order to settle a dispute between the king and the league of poets. In order to hold to the terms of his exile, he traveled blindfolded the entire time. The poets had sent for him because of his well-known love of books; however, he was so reasonable and calm, he succeeded in getting the king to compromise and see the dispute in the poets’ way.

166 comments on “Meister Eckhart vs. Columba”