Phocas the Gardner vs. Richard Hooker

In the second matchup of the Elate Eight, Phocas the Gardener faces Richard Hooker. Our ever-creative Celebrity Bloggers daily earn their keep (well, their Lent Madness mug) in the Round of Saintly Kitsch as they scour the internet for your voting pleasure. To make it to this round, Phocas bested Isidore the Farmer and Katharina von Bora while Richard made it past Mary of Egypt and Margaret of Scotland.

Yesterday, Esther narrowly defeated Peter, in an epic start to the Elate Eight, to become the first saint to advance to the Faithful Four.

Can you feel the excitement? We are getting ever closer to awarding the 2018 Golden Halo. Every vote counts! 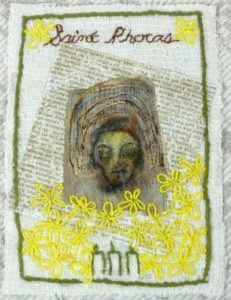 It is a truth universally acknowledged, that a worthy saint in possession of a high number of Lent Madness votes, must be in want of some kitsch. With each successive year, as new saints are added to the pantheon of those hallowed souls that have reached the Elate Eight, and, yes, as the saints get slightly more obscure, or come from slightly deeper cuts into church history, one might expect that even the hallowed corners of the internet might come up completely empty of saleable merchandise for a Saint such as our dear Phocas the Gardener.

Friend, have you not learned to trust Etsy? Have you not learned that somewhere, someone is working on some kind of mixed-media collage in homage to our beloved and hospitable Phocas? Indeed, for the low price of $17, you, too can have a new, modern reinterpretation of the iconography for Saint Phocas. God watches over the saints, and indeed, Etsy watches over Lent Madness bloggers in the kitsch round. 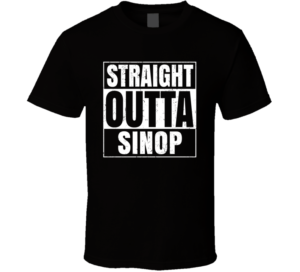 Phocas’ activities caught the attention of the Roman Empire in part because he had the distinct fortune (or misfortune) of living right next to the bustling Black Sea port of Sinope. Located in modern-day Turkey, and now called simply Sinop, his location enabled him to provide hospitality from his garden to the broad cross-section of people who would have made their way through an ancient port city. Since his location allowed him the ability to carry out his ministry to the masses, there is little doubt that Phocas would have gladly sported this “Straight out of Sinop” t-shirt. It would not have only been an expression of hometown pride, but also concise direction – Phocas’s home and garden were, literally, straight outside of Sinope’s gates.

And no garden would be complete without tools. Cultivating is hard work, and a little mechanical assistance can always help. Luckily, high end kitsch merchants have 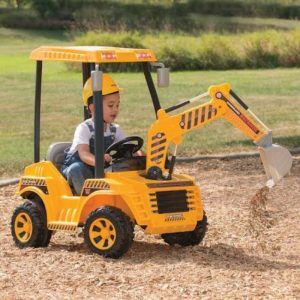 us covered. You, too, can have a mini-excavator for your garden. Powered by a staggering 12 volt battery, and with a gnarly max speed of 2.5 mph, you can introduce your child to the wonders of working the garden, tilling the soil, and providing hospitality and food for the hungry masses, just like Phocas. Bargain basement price is $349.95; hard hat, unfortunately, is not included.

Whatever you do, do not Google the word “Hooker.” Seriously. Just don’t.

If you are doing your Googles, you must type “Richard Hooker” in order to find interesting, non-fireable, material on one of the chief architects of Anglican theology and identity.

Take this statue of Richard Hooker outside of Exeter Cathedral in the United Kingdom. Sculpted (carved?) in the early 1900s and unveiled in 1907, this statue depicts the “Judicious Hooker” (no jokes, please) seated with an opened book. It is almost as if there should be a plaque in front of this statue that reads: “Richard Hooker will read you

now.” Remember, Hooker is the same man who levied critiques of Puritans and Roman Catholics, all while positioning Anglicanism is the best of the catholic and reformed Christian tradition and advocating for coalition-building Christianity. Do you know how much awesomeness one must possess to fight a battle on two fronts?

To be honest, Richard Hooker perched on this chair with this open book and unbothered countenance is #theologiangoals. When I die, I would like a Hooker-esque statue carved in my likeness. Thank you in advance.

Hooker’s words are so relevant to our contemporary context that W. Bradford Littlejohn,‎ Brian D. Marr, and Bradley G. Belschner have all adapted his Laws of Ecclesiastical Polity to modern English in Radicalism: When Reform Becomes Revolution. Brad Littlejohn actually has a great YouTube video where he reads an excerpt from the work that levies a great critique against extremism performed in God’s name. He writes, “Here lies the greatest danger of all. For when divine authority is used to justify things which are not the commandment of God, but your own mistaken suppositions, you’ll attribute to God whatever you are later led to do in defense of your cause. What this will lead to, God only knows.” 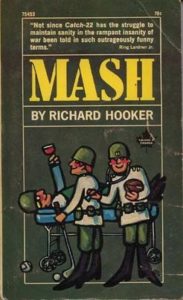 Those of you who belong to the older generation, might remember a television program called M*A*S*H, a comedy-drama that ran form 1972-1983. This television series was based on a book called MASH: A Novel About Three Army Doctors written by Richard Hooker. Richard Hooker is pretty amazing, but even he had to “go the way of all the earth.” (He died, y’all). The Richard Hooker who wrote MASH in 1968 is actually a penname for Dr. H. R. Hornberger, a former military surgeon and writer, who was born in Trenton, New Jersey. Somehow, the original Richard Hooker influenced the latter and he, the latter that is, wrote a book that influenced the creation of a wildly popular television program that basically defined the 70s. (That, and “Good Times” and “Wonder Years). So, basically, Richard Hooker defined the 70s. America, you’re welcome.

Phocas the Gardener vs. Richard Hooker

164 comments on “Phocas the Gardner vs. Richard Hooker”