Benedict of Nursia vs. Dorothy Day

Welcome, friends, to the last full week of Lent Madness. Today we get the final match-up of the Round of the Saintly Sixteen. Then Tuesday through Friday we'll experience the four battles of the Elate Eight as we encounter the controversial mirth of saintly kitsch. More about that tomorrow.

But first it's Benedict of Nursia tangling with Dorothy Day for a shot at Luke the Evangelist. Dorothy made it here by knocking off Edward Thomas Demby while Benedict routed Anne, Jesus' grandma.

We hope everyone made it through another weekend of Lent Madness Withdrawal without having to enter online rehab. The SEC has counselors standing by if you need additional help. We did our part by offering you FREE Lent Madness ringtones for you smart phones. And we also offered some timely advice to Pope Francis from one Supreme (Executive Committee) to another Supreme (Pontiff). It was the least we could do. Really.

Finally, the mysterious Maple Anglican kicks off his daily videos today which will run throughout the duration of Lent Madness. At which point perhaps he will get a real job. 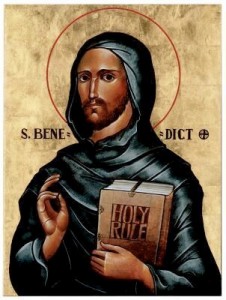 Benedict of Nursia (c.480-c.550) is the subject of numerous legends in the second book of Gregory the Great’s Dialogues. One is about a youthful Benedict whose housekeeper borrowed a sieve that was then accidentally broken into two pieces. The housekeeper began to weep, so Benedict began to pray. When he finished, the sieve was found to be whole. After word of this miracle spread throughout the town, the sieve was hung on the door of the local church. Benedict was treated like a Lent Madness Celebrity Blogger. But he renounced such fame, fleeing both the town and his housekeeper. OK…that was totally weird. Let’s move on to quotes from his famous Rule for monastic life.

From Chapter 53 (“On the Reception of Guests”):

“Let all guests who arrive be received like Christ…

“In the salutation of all guests, whether arriving or departing, let all humility be shown. Let the head be bowed or the whole body prostrated on the ground in adoration of Christ, who indeed is received in their persons.

“After the guests have been received and taken to prayer, let the Superior or someone appointed by him sit with them. Let the divine law be read before the guest for his edification, and then let all kindness be shown him. The Superior shall break his fast for the sake of a guest, unless it happens to be a principal fast day which may not be violated. The brethren, however, shall observe the customary fasts. Let the Abbot give the guests water for their hands; and let both Abbot and community wash the feet of all guests.…

“In the reception of the poor and of pilgrims the greatest care and solicitude should be shown, because it is especially in them that Christ is received…”

“Although the life of a monk ought to have about it at all times the character of a Lenten observance, yet since few have the virtue for that, we therefore urge that during the actual days of Lent the brethren keep their lives most pure and at the same time wash away during these holy days all the negligences of other times.…

“During these days, therefore, let us increase somewhat the usual burden of our service, as by private prayers and by abstinence in food and drink. Thus everyone of his own will may offer God ‘with joy of the Holy Spirit’ (1 Thess. 1:6) something above the measure required of him. From his body, that is he may withhold some food, drink, sleep, talking and jesting; and with the joy of spiritual desire he may look forward to holy Easter.”

And isn't that precisely what Lent Madness helps us all do? "Look forward to holy Easter with the joy of spiritual desire." 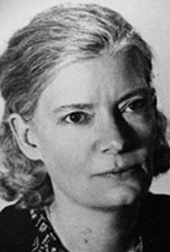 From the time of her conversion to Christian faith in the mid-1920s, Dorothy Day, an American laywoman who co-founded the Catholic Worker movement, served as an exemplar to all who would seek to live lives of faithfulness to God by serving those in need.

Prior to her conversion, Day was a wild bohemian girl who wrote for socialist publications and hob-nobbed with prominent radicals in Greenwich Village. However, as Day wrote in her autobiography,”The Long Loneliness,” the experience of the birth of her daughter Tamar magnified her love and devotion to God. “It was all very well to love God in His works, in the beauty of His creation, which was crowned for me by the birth of my child... The final object of this love and gratitude was God. No human creature could receive or contain so vast a floor of love and joy as I often felt after the birth of my child. With this came the need to worship, to adore.”

Before long Day translated that worship and adoration into the nitty-gritty of serving the needs of people living in poverty and protesting the injustices of society. The movement’s houses of hospitality and farm communes are based on her belief that such work is best done in community. She wrote, “Men are beginning to realize that they are not individuals but persons in society, that man alone is weak and adrift, that he must seek strength in common action.”

In her famous Union Square speech of November 1965, she said,

"I speak as one who is old, and whose whole lifetime has seen the cruelty and hysteria of war in this last half century. But who has also seen, praise God, the emerging nations of Africa and Asia, and Latin America, achieving in many instances their own freedom through non-violent struggles, side by side with violence. Our own country has through tens of thousand of the Negroe [sic] people, shown an example to the world of what a non-violent struggle can achieve. This very struggle, begun by students, by the young, by the seemingly helpless, have led the way in vision, in courage, even in a martyrdom, which has been shared by the little children, in the struggle for full freedom and for human dignity which means the right to health, education, and work which is a full development of man’s God-given talents."

In 1976 Day asked Robert Ellsburg, a 20-year-old student on leave from Harvard who had come to New York to work with her, to be the managing editor of The Catholic Worker. At 77 she was in “retirement” and left the day-to-day operation of things to “the young people.” Ellsburg wrote, “My promotion had very little to do with any qualification for the job and everything to do with the fact that no one else was particularly interested. Dorothy had faith in people, and she was able to make them feel her faith as well, so they forgot their feelings of inadequacy and found themselves doing all kinds of things they never dreamed possible.”

At 19, while writing a garden-variety undergraduate paper on Day for a class on Christian political communities, I discovered this quote by Day that continues to transform the way I looked at prayer. She wrote that “prayer is outside of time.” As the only non-seminary trained Celebrity Blogger, I have no real interest in whether that notion has any theological chops. Frankly, I don’t care. What matters is me is that the idea that prayer is not constrained by the limitations of the “now” is a highly liberating concept that enlarges my view of God.

Historian Walter G. Moss, in his 2011 monograph, “The Wisdom of Dorothy Day,” concludes,

“More than three decades after her death, her legacy remains impressive. By 2011, according to the Catholic Worker website, ‘213 Catholic Worker communities remain committed to nonviolence, voluntary poverty, prayer, and hospitality for the homeless, exiled, hungry, and forsaken. Catholic Workers continue to protest injustice, war, racism, and violence of all forms.’ Her work and legacy continue to serve as a gentle reminder, to politicians and intellectuals among others, that what matters most is not what we say or how we label ourselves, but what we do. As psychologist Robert Sternberg wrote, ‘People are wise to the extent that they use their intelligence to seek a common good.’ By that measure Dorothy Day was wise indeed.”

However, Day herself said, “Don't call me a saint. I don't want to be dismissed so easily.”

Benedict of Nursia vs. Dorothy Day

87 comments on “Benedict of Nursia vs. Dorothy Day”