Welcome to the Faithful Four. After weeks of learning and deliberating and voting and eschewing chocolate, we have whittled the field of 32 saintly souls down to four spiritual heroes: Constance, Julian of Norwich, Dietrich Bonhoeffer, and Sojourner Truth. All are worthy of the coveted Golden Halo, yet only one will end up with his or her mug on a mug.

In this round, we let our four remaining Celebrity Bloggers loose as they answer the question “Why should Saint XX win the Golden Halo?” In other words, they’ve been charged with letting us know why their particular saint is so awesome. We have also invited them to share their two favorite images of their saints.

To make it to the Faithful Four, Constance dispatched Dominic, Helena, and Vida Dutton Scudder with relative ease. Julian snuck past William Wilberforce, before defeating Roch and Albert Schweitzer.

Maybe one of these remaining four will end up on a future Pocket Lent card. What's that? Well the SEC released two new ones yesterday for your cutting and pasting pleasure.

Let the voting (once) begin! 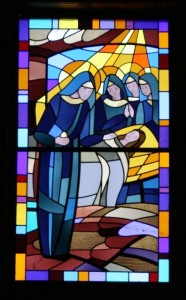 Inside everyone is a secret desire to be a superhero at a time when the world needs heroes. We want to stand up and be more than we think we are capable. We want to have the passion for great deeds. We want to be the change we want to see in the world. I think this is what St. Paul calls the "Holy Spirit within us." This spirit-spark calls us all to greater things.

Constance and her Companions had this God-spark within them. They were called as educators, but took on the role as nurses and caregivers during the epidemic of yellow fever that destroyed Memphis, Tennessee in 1878. They took action when great deeds were needed in the town where God planted them. Constance and Her Companions stayed to make a difference. As one avid reader noted in response to my coined term, "Constance would Go," the appropriate tag-line should be "Constance Would Stay."

God calls us to stay through many difficult times. We all have the opportunity to bear witness to Christ's love to others in disease, infirmity, poverty, social ills, and wrongs, during times when humanity seems to bear down on us as a disease rather than a gift. God calls all of us.

Sure, voting for Constance and her Companions is a vote recognizing the wonder of a giving soul during a horrific disease. She not only gave of her 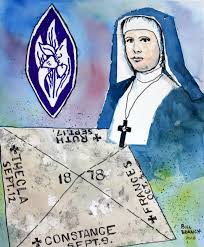 A vote for Constance is a vote recognizing the God-spark in us all. It is a vote that acknowledges each of us in our own individual ways are saints that are called to honor God with our actions, deeds, words, writings, and lives. "Constance Would Go" may ring a bell with you, but you could easily replace it with your own name: "Anna Would Go;" "Tim Would Go;" "Scott Would Go;" "Joe Would Go;" "Jane Would Go." We all should Go (or stay) as God calls us. "A faith without works is no faith."

To "go" means to bear witness to all the actions of the saints. Therefore, whether you are called to the social activism of your saints, or the liturgical writings, or the creative songs, or passionate political stances, remember, a vote with "Constance would Go" is a vote for all the actions of all the saints.

Constance watercolor by Bill Branch. You can see more of his art online at his website, www.billbranchartist.com. 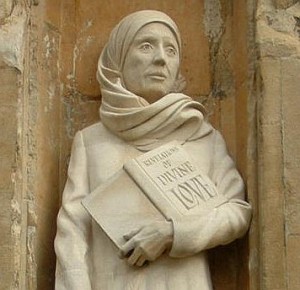 It astonishes me as both a priest and a parent how quickly, even in the twenty-first century children come to think of God as male. I strive to use inclusive language in liturgy, preaching, teaching and our household God talk, and yet all it takes is the occasional male pronoun slipping in for children to make the leap.

Therefore, Julian’s feminist Trinitarian theology born in the fourteenth century is utterly astonishing. She sees Christ in the role of mother alongside God the father. God incarnate is best imagined via the physical nurture and love of a mother—birth, breastfeeding, and boo-boo tending.

And how does she know? Not by rigorous scholarship and systematic inquiry, but divine revelation—God showed her! I am immensely grateful for the education that allowed her to write down these showings, making her the first female author of a book in English.

Though her contributions are not only intellectual or theological, but pastoral. I know of countless people who have taken comfort in her optimistic vision of God, humanity, and eschatology. Many people have a favorite quote or passage they can reference—being clothed in God’s love, or the assurance that all will be well.

Personally, her vision of the hazelnut has brought me great comfort. Years ago, before becoming a mother of twins, I experienced years of 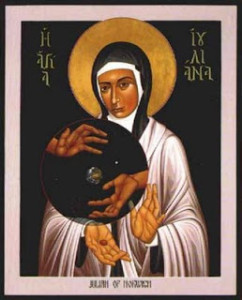 infertility, culminating in a miscarriage. My wonderful spiritual director pointed me toward Julian, and I remembered the Bridge Building Images Icon of her that sat in the chapel at CDSP when I was in seminary.

"And in this Christ showed me a little thing, the quantity of a hazelnut, lying in the palm of my hand, as it seemed. And it was as round as any ball. I looked upon it with the eye of my understanding, and thought, 'What may this be?' And it was answered generally thus, 'It is all that is made.' I marveled how it might last, for I thought it might suddenly have fallen to nothing for littleness. And I was answered in my understanding: It lasts and ever shall, for God loves it. And so have all things their beginning by the love of God."

When I thought of the pregnancy I had lost, an embryo about the size of a hazelnut, I was deeply comforted by the idea that it had begun by God’s love and in some mysterious way would always have life in that love. Since that time, I have shared the quote with other grieving women in my pastoral care, and it always brings comfort.

Courageous, compassionate and ahead of her time, Julian is an inspiration and comfort to the modern Christian. She most assuredly deserves the Golden Halo.

Reminder: Vote once only per person. Lobbying others to vote is fair game. Voting hundreds of times is not.

229 comments on “Constance vs. Julian of Norwich”