The fast and furious pace of the Saintly Sixteen continues today as Martin de Porres faces Maria Skobtsova. To get to this round, Martin defeated John of Beverley and Dymphna while Maria took down Thomas à Kempis and Quiteria.

In yesterday's saintly action, Richard Hooker and his three-legged stool buried Phocas the Gardner and will face the winner of tomorrow's battle between Anna Alexander and Eglantyne Jebb in the Faithful Four.

As we get deeper into the season, many of the Lent Madness faithful must decide between two saints they voted for in previous rounds. Oh, the agony! And yet in the end, despite all the amazing saintly souls, only one will emerge victorious. 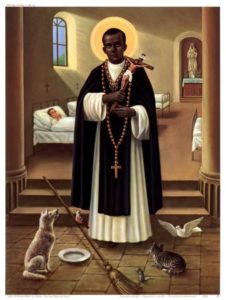 St. Martin de Porres Velázquez, born in 1579, died in 1639, and lived his entire life in Peru. After years of disrespect and oppression, he was eventually admitted as a lay brother of the Dominican Order.

Martin was known for his kindness to those with no hope; his compassion to the sick, the weary, and children; his healing abilities; and his miracles.

In artwork, windows, statues, statuettes, medals, holy cards, posters, and books, he wears the Dominican lay brother habit, often with a broom (because no chore was beneath him), sometimes with a dog, a cat and a mouse or a bird. 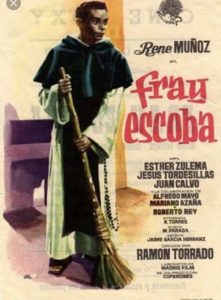 He is a media star, too. Among the movies and television shows depicting his life are the 1963 film Fray Escoba (Friar Broom) and 1975 Un mulato llamado Martin. 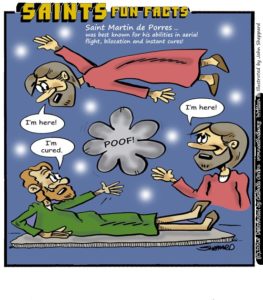 A character in the popular 1980 novel A Confederacy of Dunces prays to Martin for justice for black factory workers. Jazz pianist Mary Lou Williams honors him with “St. Martin De Porres,” a track from Black Christ of the Andes. 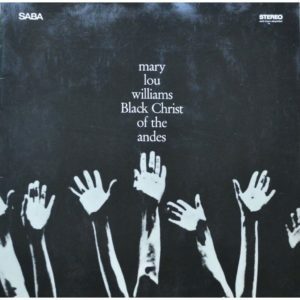 Martín de Porres Velázquez - St. Martin of Charity - St. Martin the Charitable - the first Black Saint from the Americas - Saint of the Broom – pray for us.

Being a Russian Orthodox nun living in Nazi-occupied France, you might think that Maria Skobtsova would not have much in the way of kitsch. You would be wrong. 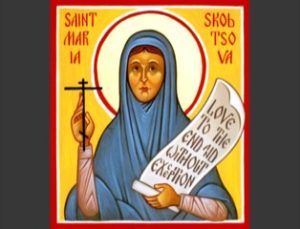 Maria excels not just at poetry, not just at theology, and not just at Nazi-fighting, but also at kitsch-producing. Behold, for starters, this lovely icon. It includes a quote from her, as well as the crucifix she showed the German official who asked her where she was hiding the Jews during her interrogation. (Not without a sense of humor, was Maria.)

She also has her own street in Paris!  That’s right!  Smack dab in the 15e Arrondissment, a street sign memorializes the life of “Mère Marie Skobstova,”  (In English the sign reads: Resistance member assassinated at Ravensbruck)

Oh, did I not mention she was an artist?
YOU BET YOUR BORSCHT SHE WAS. Look at this icon she embroidered!  (That’s embroidery, y’all.) 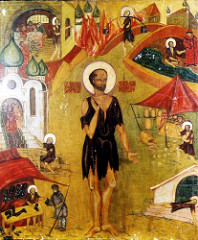 And this one, that she drew, of a Russian saint who I’m sure is very holy, but appears to be doing a little dance!

Now, perhaps you are a bit sad, because what you are looking for is some fun kitsch. Some wacky kitsch. You’re in luck!

If you truly want to follow in the poetry-writing, icon-embroidering, beer-drinking footsteps of Maria, then firstly, you need a crucifix. I recommend this one. It is an excellent size to brandish in the face of any fascists you might encounter in your daily life. Carry it in your pocket and if someone asks you to do anything evil, pull it out and wave it in their face! Also wards off vampires, so: bonus!

You’ll also need a notebook, for those flashes of inspiration. There are many to choose from, of course. We have the inappropriately-religious themed (that’s….not what that verse is about) to the humble-brag themed, to the hipster meme-approved! Definitely something for everyone! (My money is on Maria owning the last one.)

To conclude on a more solemn note, Maria did leave a final, poignant bit of herself behind, as well as a lot of amazing work and inspiration. While she was in Ravensbrück, she traded her bread rations each day for a bit of colored thread, so she could continue to make art. She embroidered icons, including one of the British landing at Normandy, until she died. Her work, up until her final moments, was bringing light and joy into the lives of those around her in any possible way she could, even in the worst possible conditions. And miraculously, her final work survived the camps.