Who will face Martha of Bethany for the Golden Halo? That's the question for today after Martha stung Gobnait 51% to 49% despite a late swarm (and a whiff of overzealous Gobnait supporters) to reach the Lent Madness Championship round.

To get to this point, Zenaida took down Apollonia, Nicholas of Myra, and John Chrysostom, while Pandita defeated Damien of Molokai, Marguerite d'Youville, and William Wilberforce. Whoever wins, the Golden Halo will be decided on Spy Wednesday, with the results announced at 8:00 am Eastern Time on Maundy Thursday. The end is near!

SEC Reminder: We know people get swept up in the fervor of Lent Madness, and sometimes they get so excited they want to vote a few times. Yesterday, we observed quite a few cases of people voting for one saint several times, often 20 or more times. When we catch these, we ban those IP addresses and, assuming we can ascertain with confidence the number of votes, we reverse the votes. Our goal is to make Lent Madness fair and fun for everyone, one person making one vote. We use a combination of manual and automated systems to watch this and yesterday, to try to get these as early as possible, we set our triggers pretty low. So if you find yourself banned, do let us know. And make sure you’re only voting one time per contest! Big Lent is watching...

Oh, and if for some crazy set of circumstances, you missed yesterday's final in-season episode of Monday Madness featuring our first-ever in studio guest, make sure to catch it here. 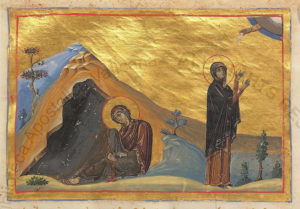 As the sun began to rise over the mountains, Zenaida, Philonella, and Hermione linked hands and bowed their heads in prayer. Lifting their words and hearts to God, they ask that they be filled with grace to serve today’s patients. Zenaida loved this opportunity to connect with her sisters before a busy day at their make-shift hospital. The sisters found that beginning each day with prayer helped them focus their care and practice so that they would not only minister to what ailed their patients’ physical bodies, but also called them to minister to their spirits.

The day was going to be a hot one. The dust from the caves made it difficult to keep the wounds of the patients clean. The sisters gave thanks regularly that the cave where they housed their “unmercenary” hospital had a mineral spring to aid in cleaning the patients. So many of the poor arrived dirty, malnourished, and dehydrated. The spring was a gift to their prac 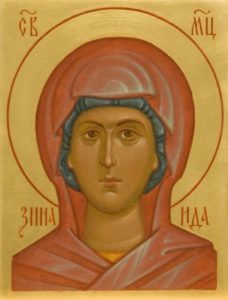 Despite the heat and dirt, Zenaida was excited. She had asked her cousin, Paul the Apostle, to come by. There was a patient who had asked to be baptized. This baptism was especially heartening as this patient had been convinced only magics, charms, and amulets could heal his illness. She knew through her studies that there were far more effective treatments available and that his true healing would only come through nurturing his whole person: mind, body, and spirit. Zenaida felt that she was helping him make a real breakthrough in his mental and spiritual health when he asked for the healing waters of baptism. He finally seemed to realize that no physical cure was sustaining without the gift of salvation.

Today, Zenaida felt the presence of the Holy Spirit strongly. So many of the patients thanked her and her sisters for the free healthcare they provided. She wished she could explain to them that the opportunity to share the love of God with others was worth more than any gold they could ever pay. In fact, Zenaida and Philonella had plans to take their inheritance and invest in building a hospital in nearby Demitriada. Zenaida knew she would have no need of her wealth as long as she could continue to serve the people of God. She was at peace.

Heavenly Father, we asked that we are called to be unmercenary like Zenaida and her sisters. That in our thoughts, words, actions, and lives that we consider giving freely of the greatest gift you have given us as humans: to love. Amen. 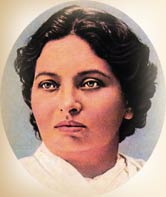 In 1858, Pandita Ramabai was born into a high caste Indian family who defied custom by educating her. When she was widowed, she could support herself with her scholarly skills. However, she saw other widows thrust into dire poverty. Ramabai believed that the way to improve the status of women and change her culture was to educate widows so that they could provide for themselves. She went to England and fundraised to this end. There, moved by Jesus’s conversation with the Samaritan woman at the well, she became a Christian. “I realized...that...no one but [Christ] could transform and uplift the downtrodden women of India.”

Upon returning to India, she began Sharada Sadan school and the Mukti Mission, which still operate today, teaching women trades so that they can support themselves independently. Her social activism was remarkable in her time, and her example of a life given to social transformation makes her deserving of the Golden Halo.

The need for such social transformation remains with us to this day. The United Nations, as part of its Sustainable Development Goals for 2030 has focused on girls' education because of the multiplier effect educating a girl has on a country’s economy.[1] Poverty, child marriage, and cultural traditions such as dowries are among the main obstacles to girls’ education.

According to UNICEF, “India has the highest absolute number of child brides in the world – 15,509,000. 27% of girls in India are married before their 18th birthday and 7% are married before the age of 15.”[2] Developed nations are not free of this problem. A Frontline investigation revealed that in the United States 200,000 legal marriages with at least one minor took place between 2000 and 2015. “ 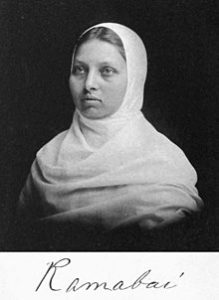 The vast majority of child marriages were between a child and an adult. The majority of married children were girls.”[3]

The effects of child marriage are striking. When a girl gets married instead of educated, her marriage has an imbalance of power and she is more likely to be a victim of domestic violence. Statistically, she will have more children she will struggle to feed, and they will be less healthy. She will likely not have the skills to be independent, and if her husband dies, she may become destitute. Pandita Ramabai sought to change this reality for women.

For her challenge to cultural and religious hierarchy, she was vocally criticized. Her conversion to Christianity put her at the center of a debate about Colonialism and Indian nationalism, where she remains for some to this day.[4] But one cannot argue that her education, her convictions, and her faith in the liberating love of Jesus have led her to change the lives of thousands of women, a work that continues in her name. In honor of all the women touched by Ramabai’s mission, let’s award her the Golden Halo!

106 comments on “Zenaida vs. Pandita Ramabai”