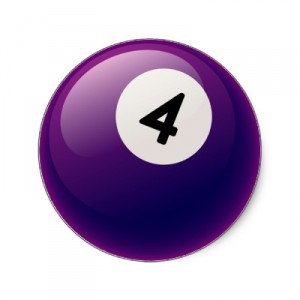 The Faithful Four continues today as Dietrich Bonhoeffer takes on Emma of Hawaii for the right to face Mary Magdalene (who dominated Margaret of Scotland yesterday) for the 2012 Golden Halo. This match-up features one of the favorites to make it to the Faithful Four (Bonhoeffer) along with the true Cinderella of Lent Madness (Emma).

If anyone who completed a bracket before the start of Lent Madness had Emma of Hawaii making it this far, we commend you for your prophetic voice. Though we secretly believe you’re lying. Seriously, did anyone out there pick Emma to make it to the Faithful Four?

To get to this point, Dietrich Bonhoeffer defeated James the Apostle, Brigid of Kildare, and Jerome while Emma of Hawaii got past Catherine of Siena, Paul of Tarsus, and Thomas Cranmer. And now, in the final battle before the Championship Round, we turn it over to celebrity bloggers Neil Alan Willard (Dietrich Bonhoeffer) and Heidi Shott (Emma of Hawaii).

Just as a reminder, the polls for the Golden Halo will open at 8:00 am on Spy Wednesday and close at 8:00 am on Maundy Thursday. Here’s the updated bracket. 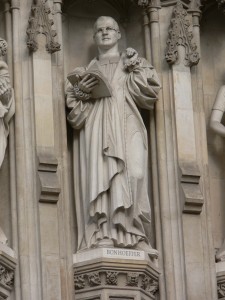 Easter Monday will mark the sixty-seventh anniversary of the execution of Dietrich Bonhoeffer at the Flossenbürg concentration camp in Nazi Germany and of his last words: “This is the end – for me the beginning of life.” Those words, it seems to me, testify to the Easter faith that will be proclaimed this weekend throughout the world. In proximity to human suffering on a scale that is unimaginable to most of us, Bonhoeffer was able to declare that the ultimate word, a word of life, belongs to God.

The St. Stephen’s Martyrs – a group of men at my church – gather weekly for an hour or so of theology and a pint or so of beer. About a year ago we talked about the Holocaust. While having that discussion, there were related artifacts, Nazi and otherwise, in the middle of the table. It’s one thing to see th 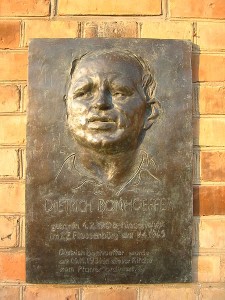 ose objects in old black and white news reels and quite another to see them in living color as we wrestled with suffering, revenge, justice, doubt, and – yes – faith, too. I can’t imagine how much harder it must have been for Bonhoeffer and others as they together wrestled not with relics but with realities. These were imperfect people, including Bonhoeffer, making imperfect decisions that they would have to live with for the rest of their lives.

Would we have returned home to Germany rather than stay in the United States? Would we have supported an underground seminary for the Confessing Church? Would we have chosen to jam the wheel of injustice by helping the conspiracy to assassinate the Nazi Führer Adolf Hitler? 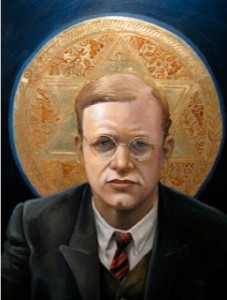 Bonhoeffer made a decision, as a result of his faith in Christ, to stand with his own people and with the innocent in the midst of their experience of Good Friday. That, I think, was his most important and courageous decision.
Here’s a final endorsement from a higher authority in the Anglican Communion. Soon after the Archbishop of Canterbury, Rowan Williams, announced that he would be resigning his position at the end of this year, he was interviewed about his various roles and secularism and faith by a parish priest in the Church of England. Archbishop Williams was asked, as the final question, with whom he would like to have dinner if he could sit down with anyone who has lived over the last hundred years. He answered, “Dietrich Bonhoeffer.”

The Archbishop of Canterbury has cast his vote. Now it’s your turn. 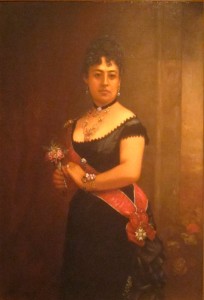 After such hefty and regular doses of saintliness these past 40 days, the notion of what constitutes a saint is somewhat clearer in my mind. Several characteristics stand out: faithfulness to God despite hardship, fierce loyalty to one’s people, extravagant charity outside the bounds of cultural and social expectations. Queen Emma of Hawaii displayed all of these in boundless measure. Ultimately saintliness – our own included – is determined by the choices we human beings make over the course of our lives. Emma’s remarkable witness and legacy is defined by her choices.

Despite the tragedy of losing her beloved young son and her cherished husband as a woman still in her twenties, she chose to overcome her grief and become a staunch advocate for the Anglican mission in Hawaii and for her people. Despite her high station in life, she chose to work tirelessly to improve the health, the education, and the spiritual well-being of native Hawaiians of all ranks as well as haolies and foreigners.

Upon her death in 1885, Emma, whose baptism had been the first recorded in the parish register of St. Andrew’s Cathedral, was eulogized in Hawaiian by a congregational minister, the Rev. H.H. Parker. He posed the question to the grieving, “How did the late queen hold so supreme a place in the hearts of her people?”

He answered: “She loved the people. Love begets love. The common people believed that Queen Emma really did care for 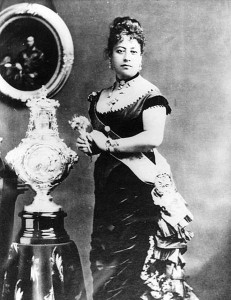 I am deeply inspired by the choices that Queen Emma made. She could have hunkered down in a cocoon of grief and privilege given her losses, her wealth, and her royal status. She could have abandoned the work of building the cathedral and the schools, but instead she sailed across two oceans to drum up funding for the cause. Indeed Bishop Wilberforce of Oxford, her guide in England, said, “…her energetic efforts and activities taxed his physical endurance.” By the time she left England – where she drew standing-room only crowds at numerous cathedrals – she had raised 6,000 pounds (about $640,000 in today’s currency) for the work in Hawaii.

An obituary read, in part: 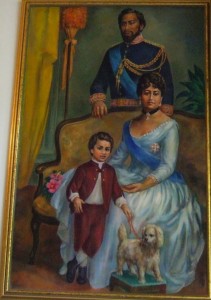 “The Queen is dead. We will not think of her as dead. Her good deeds will live after her, in them she will live, in that noble Hospital, in her Christian example she will live and those who knew her, loved her, cherished her can say with resignation:

There is no death!
What seems so is transition;
This life is of mortal breath
Is but a suburb of the life Elysian,
Whose portal we call death.”

Many saints are honored and venerated, but few are so beloved  – generation beyond generation – as Queen Emma of Hawaii.

“Love begets love” is right, and a standard for all the saints of God.

NOTE: At 12:14 a.m. EDT, the Supreme Executive Committee removed 70 votes from Emma of Hawaii. We noticed that there were 20 votes in close succession from a residence in Hawaii and 50 from a residence in Arizona. While we commend your enthusiasm, we do not commend repeat voting. We’re watching this one carefully, so don’t vote more than once, please.

106 Comments to "Dietrich Bonhoeffer vs. Emma of Hawaii"

2 Trackbacks to "Dietrich Bonhoeffer vs. Emma of Hawaii"