Congratulations! You’ve stuck with Lent Madness as a Lenten devotion and the field has been whittled down from 32 saints to eight. After a long and winding road, we have made it to the Round of the Elate Eight. There is now light at the end of the Golden Halo and by the end of the week we’ll be down to the Faithful Four.

We begin this round with an epic battle of Biblical proportions as Peter faces Esther. To make it this far, Peter defeated Paul and John the Evangelist while Esther got past Lazarus of Bethany and Michael the Archangel. The remaining matchups in this round are Phocas the Gardener vs. Richard Hooker, Martin de Porres vs. Maria Skobtsova, and Anna Alexander vs. Eglantyne Jebb. One of these eight will win the 2018 Golden Halo.

The Elate Eight is also known as the Saintly Kitsch round. After basic biographies, quotes and quirks, what else could there be? There are always some folks who take offense to this approach — we call them Kitsch Kranks. Tim and Scott discussed this in yesterday’s edition of Monday Madness. This is not to belittle or demean our saintly heroes but to have some fun and gaze in wide wonder at the breadth of devotional practice. So kindly relax and enjoy the spirit of the Madness as we push ever onward to our goal. 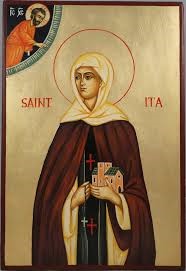 In his afterlife, St. Peter is perhaps best known for his important work guarding the gates of heaven. It’s a tough job, and who better than a repentant sinner to welcome the rest of us, in our varying degrees of holiness? Here he is looking down upon St. Ita (left) and (right) singing a duet with popstar Amy Winehouse, who died of a drug overdose in 2011. 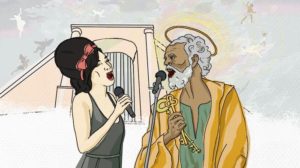 A minister dies and is waiting in line at the Pearly Gates. Ahead of him is a guy wearing a leather jacket, and jeans.
Saint Peter asks, “Who are you, so that I may know whether or not to admit you to the Kingdom of Heaven?”

St. Peter consults his list, smiles, and says to the taxi driver, “Take this silken robe and golden staff and enter the Kingdom of Heaven.”
The taxi driver goes into Heaven, and it’s the minister’s turn.
He stands proudly and booms out, “I am Joseph Snow, pastor of Calvary Church.”

St Peter consults his list. “Take this cotton robe and wooden staff and enter the Kingdom of Heaven.”
“Just a minute,” says the minister. “That man was a taxi driver, and he gets a silken robe and golden staff? How can this be?!”

“Up here, we work by results,” says Saint Peter. “While you preached, people slept; while he drove, people prayed.”

As a minister myself, if I get in, I expect I’ll be wearing cotton in the kingdom.

If you’re worried whether Peter will open the gates for you, try this work around: A key with the Rock of the Church’s saintly image on it. The pendant is sure to function just like a retina scan and send those gates swinging wide! (How much security can there really be up there, anyway?)

You could also try some ‘Success’ scented essential oils, named after Peter because people pray to him to remove obstacles. But buyer beware: Peter’s version of success involves getting crucified upside down, then fast-tracked to heaven.

You might also start pleading your case early with this personalized St. Peter stationary. Conversely, if you’re a prankster, you might order the paper printed with Peter’s address and send threatening letters to people who–in your humble opinion–need to shape up in order to pass through the Pearly Gates. 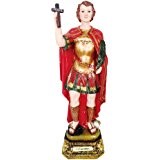 Of course, the veneration of Peter goes well beyond our self-serving concerns about who will be allowed into God’s Kingdom.  People admire him for his good works and

guidance of the early church.  Genuine fans of Peter can purchase saintly statues on Amazon, but again beware of Etsy, where a search for St. Peter might turn up this votive candle featuring the dubiously sainted Evan Peters, star of the show American Horror Story and available for purchase online.

The most devout of Peter fans might choose to honor his inverted crucifixion by wearing an upside down cross or this feminine fitted tee that simply screams, “Yes, I have a trim waist and want to show of  my Michelle

Obama arms, but I love me some St. Peter!”

Personally, I’ll be buying myself and the Rev. David Sibley matching Sts. Peter and Paul shirts to commemorate this year’s bracket. David, did you want to show off your guns, or shall I buy you the man tee? 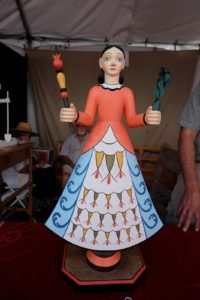 The hard part about being a super-secret, Sydney-Bristow-spy-saint is that the kitsch you have is so secret as to be hard to detect.

However, my Lenten compadres, this should not suggest to you that Queen Esther is without swag. By no means! Just that you need to know where and how to look.

For starters, cast thine eyes upon this figurine of Saint Esther. This is a prop from a play about a Hispanic family in 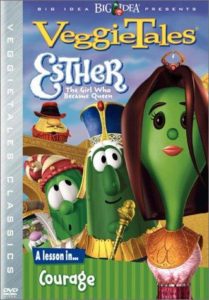 New Mexico, that discovers they are descended from the conversos who fled Spain during the Inquisition. Seen one way, the image of Saint Esther. Flipped upside down, you can see the figures of the Israelites crossing the Red Sea through the parted waters at the hand of Moses—hidden in plain sight.

Esther, please recall, is all about the power of holding onto your God-given identity, even when everything in the world would have you abandon it. This is a powerful message, and speaks to us even today. Yea, and behold, even if humans were silent, the very vegetables would cry aloud this message, for Esther’s tale was retold by the redoubtable bards of Veggie Tales (please ignore the creepiness of their lack of arms or hands, and how they yet manage to manipulate objects.) If you have a spare 40 minutes in your life, it’s all on YouTube. 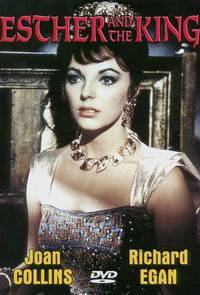 My personal favorite retelling of Esther’s story, however, is by BimBam, which will having you chanting “GO ESTHER! GO ESTHER!” If you want something more advanced, Joan Collins made a movie about Esther. Yes, THAT Joan Collins, darling. Come for the guys in hats playing bongos, stay for Haman on drugs!

Maybe that is not enough for you, however. Perhaps you need a tangible reminder to be your true, God-given self 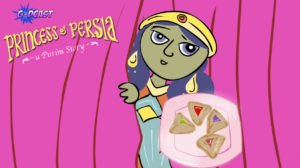 at all times. In which case, might I direct your gaze upon this selection of tiaras? Indeed, the internet is such a wonderful place that it has given to us a Tiara Town, where one can purchase not only a tiara to remind yourself to always be the self God wants you to be, but matching tiaras for all your pets.

Finally, we all know it takes courage, persistence, and stamina to resist unjust regimes. It is not easy, and it is not a quick fix. So, in all seriousness, I think Esther would be all about the Southern Poverty Law Center right now. With hate crimes seeing a meteoric rise across the country, their work in identifying and stopping hate groups in the United States is more needed than ever. After white supremacists murdered a woman in Charlottesville over the summer, they have redoubled their efforts, releasing this list of ten ways you, like Esther, can fight hatred where you are.

All of us have a role to play—whether we choose to wear a tiara or just to watch that insane Joan Collins movie on repeat. God calls on each one of us to make this a more just and loving world, as Esther tried to.