It's time for the annual Easter Monday Lent Madness post-game show with Tim and Scott. This episode celebrates the victory of Martha of Bethany, winner of the 2019 Golden Halo. You'll also witness Tim messing up the intro but, well, it's Easter Monday and he's tired. Hence his drinking coffee out of a giant vat/vintage Julian of Norwich Silver Halo Winner soup tureen.

Of course, there's also product placement, namely the pre-ordering of the 2019 Golden Halo Winner Martha of Bethany Tenth Anniversary Commemorative Mug. Get yourself a mug for only $11 and sell it on eBay later for millions, if not billions. You are also reminded that there are limited quantities left of the 2018 Golden Halo Winner Anna Alexander Mug and the 2016 Golden Halo Winner Dietrich Bonhoeffer Pint Glass. And...going somewhere? Who could forget the Lent Madness Travel Mug?

But that's not all. Nope, your last gasp of Lent Madness 2019 also includes a preview of Nominationtide, the ONLY window when the Lent Madness public (that's you!) gets to suggest saints for the upcoming year of the Saintly Smackdown. Look for this brief but exciting period  coming up later in Eastertide.

END_OF_DOCUMENT_TOKEN_TO_BE_REPLACED

SEC Note: We recorded this week's episode of Monday Madness this morning, before we knew about the devastating fire at Notre Dame cathedral in Paris. Our prayers are with Paris, especially emergency responders, and all those in harm's way.

In other news, Lent Madness 2019 continues to make penitential history as the first-ever all-female Faithful Four is under way today and tomorrow. Tim and Scott preview the battles and also share how the final championship match will go down on Spy Wednesday. As of Thursday morning at 8 a.m. Eastern time, this year's Lent Madness will be in the books. And by "books" we mean the annals of Lenten history. We can't predict the winner, but we can be sure that this year's champion will even out the gender line-up of Golden Halo winners, with five men and five women having taken the crown.

END_OF_DOCUMENT_TOKEN_TO_BE_REPLACED

As the giant purple Lenten clock ticks down to the start of the Elate Eight -- aka the Round of Saintly Kitsch -- Tim and Scott share their annual warning about Kitsch Kranks, the people who just can't get on board with this level of fun and frivolity.

In this week's episode of Monday Madness, you'll get a reminder of the First and Second Great Commandments of Lent Madness, but also the reminder that if you want the facts about saints, you can always revisit the basic biographies of the first round or the quirks and quotes of the Saintly Sixteen by clicking the Bracket Tab.

The SEC also celebrates the naming of St. Anna's Episcopal Church, a new church born out of the merger of two congregations. Inspired by the 2018 Golden Halo winner, Anna Alexander, they chose the name St. Anna's. We shared this story in a special post.

Also, if you want to hear the rare instance where Scott accidentally called Tim a "friend", tune into Scott's interview with Sandra T. Montes on her Lenten podcast. He also talks about Lent, "go big or go home" liturgy, and his journey into the Episcopal Church. If you need to cleanse your palate after listening, you can read Tim's new book while you sip some coffee.

END_OF_DOCUMENT_TOKEN_TO_BE_REPLACED

Despite the fact that it's April Fools' Day, Tim and Scott aren't fooling around in this week's episode of Monday Madness. Or at least not more than usual. In fact, after the incident of April 1, 2017, when some people were taken in by the SEC's announcement that Lent Madness was canceled, we have learned the hard way not to attempt such things with the Lent Madness global viewing public.

You always know Tim and Scott are desperate for things to talk about when they dip into their Santa sack-sized bag of viewer mail (editor's note: the use of the term "Santa" is not an endorsement of St. Nicholas of Myra). In today's show, you'll learn what surprised the SEC in the first round, whether or not they make predictions about the outcome, and what they eat to celebrate saints' days. (Spoiler alert: nothing, because Lent). 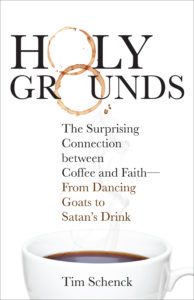 If you continue watching this Gandhi-like episode (in length, not content), you'll hear Tim blabbing about his new book, Holy Grounds: The Surprising Connection between Coffee and Faith—From Dancing Goats to Satan’s Drink, which releases tomorrow. You can buy it at most disreputable booksellers or on Amazon. You may recall a few episodes of last year's Monday Madness filmed from his sabbatical in exotic locales, such as coffee farms in Nicaragua -- this book is the caffeinated fruit of that labor.

Of course, Scott didn't let Tim self-promote without making sure our viewers know about his two recent books, co-authored with Melody Wilson Shobe (Walk in Love: Episcopal Beliefs and Practices and Faithful Questions: Exploring the Way with Jesus). You can get Scott's books from Forward Movement (here and here) or Amazon (here and here) or your local bookseller.

END_OF_DOCUMENT_TOKEN_TO_BE_REPLACED

On this Feast of the Annunciation, we are pleased to announce -- albeit without the able assistance of the Archangel Gabriel -- that it's time for a new episode of Monday Madness! Yes, everyone's favorite video commentary on the ins and outs of Lent Madness is ready to air. This week, Tim and Scott (collectively, the Walter Cronkite of Lent) preview the imminent arrival of the Saintly Sixteen, and highlight the upcoming epic concluding contests of the Round of the 32.

END_OF_DOCUMENT_TOKEN_TO_BE_REPLACED

Gather up the children, wheel in the elders, procure a giant bucket of purple popcorn, and settle in for this week's all-new episode of Monday Madness. That's right, folks, this is not the Lenten equivalent of a Law & Order rerun from 2002. This is a brand new episode filmed live on this very day!

This week, Tim and Scott highlight some of the tremendously creative fans of Lent Madness who have distinguished themselves by their undying devotion to the world's most popular online Lenten devotion. Who says Lent doesn't go hand-in-hand with daily show tunes and limericks?

Perhaps these creative souls were first inspired by Sr. Diana, our hymn-writer in residence and author of the official hymn of Lent Madness (brilliantly recorded by St. Peter's Episcopal Church in St. Louis, MO). But from wherever their creative mojo derives, we encourage more of the same. Keep it coming!

But, of course, that's not all Tim and Scott discuss. You'll also learn about some fascinating upcoming battles this week, including a special limerick challenge on Wednesday!

END_OF_DOCUMENT_TOKEN_TO_BE_REPLACED

It's Monday, and that means it's time for another epic episode of Monday Madness, in which Tim and Scott bring you Oscar-worthy* weekly updates on Lent Madness action.

As the name would indicate, the Supreme Executive Committee is extremely humble. In today's episode, which they filmed on their knees, they leave their comfort zone to share some big news about the record-breaking 2019 Opening Day numbers, including most page views ever (39,000) and most votes ever (nearly 11,000). They also celebrate the Lent Madness Twitter account crossing the 5,000 follower threshold. Speaking of which, are you following @LentMadness on Twitter? You should be.

For an unprecedented two weeks running, they don't mention the Lentorium, but don't let that stop you from making a visit.

END_OF_DOCUMENT_TOKEN_TO_BE_REPLACED

In this week's edition of Monday Madness, Tim and Scott come to you live on the eve of Celebrity Blogger Day (a.k.a. #ShroveBloggerDay). Scott is at the chapel at Virginia Theological Seminary (what's he doing there? tune in to find out!), which features an almost-golden halo over the altar. Tim shows off his Ash Thursday Bounty, and there's STILL time in the episode to preview the kickoff of Lent Madness 2019, coming up later this week!

By the way, even though they didn't mention the Lentorium on air (a first in modern Monday Madness history), you can still shop there. Or you can head straight over to Amazon to get the Saintly Scorecard 2019 for your Kindle device. But if you don't want to spend money, no worries. Just visit the bracket page, print out your bracket, and make your picks for this year's action-packed line-up.

END_OF_DOCUMENT_TOKEN_TO_BE_REPLACED

Friends, it's time for a brand-new episode of Monday Madness, featuring what Lent Madness historians believe is the first-ever double video post! Yes, brace yourselves, settle in with a giant cauldron of popcorn, and enjoy TWO videos embedded in this single post.

This week on Monday Madness, Tim and Scott discuss their shock at having once again been passed over for an Academy Award. Still, they soldier on, sharing Lenten joy and sanctoral smackdowns the world over.

Despite their dejection and outright rejection, Tim and Scott are pleased to share what is perhaps the definitive recording of the Official Lent Madness Hymn. You may recall that the Lent Madness global viewing public chose among three options penned by Hymn Writer in Residence Sr. Diana. A new version of "The glory of these forty days" is now the Official Hymn of Lent Madness. We're grateful to organist & director of music David Sinden and rector Fr. Luke Jernagan -- and their whole congregation -- for offering this wonderful recording from St. Peter's Episcopal Church in St. Louis, Missouri. We're also pleased to see that at St. Peter's, as at churches in all of Christendom, nobody sits in the first few pews.

END_OF_DOCUMENT_TOKEN_TO_BE_REPLACED

It's hard to believe, but it's already been a week since the last episode of Monday Madness. Time flies when you're anticipating Lent! (Speaking of which, if you haven't already done so, you should forget about Game of Thrones and binge-watch all eight seasons of Monday Madness right now.)

Anyway, Scott and Tim are back with another compelling episode of must-see pre-Lenten TV. This week, they share the results of the first-ever three-option vote on Lent Madness, in which the global viewing public chose the new Official Hymn of Lent Madness.

Before we get to the results, now would be a good time to remind you to load up on special Lent Madness items, including the commemorative Tenth Anniversary Edition of the Saintly Scorecard. Just like last year, we are selling the scorecards individually or in packs of 10. To get the best price order three or more packs of 10, for an unbelievably low price of just $1 per scorecard. You’ll also want to buy the astonishing 2019 Giant Bracket Posters. They’re a steal at just $11. There’s no extra charge for the full color printing, and they get cheaper. It's only $10 each when you buy two or more. Why not get an even dozen?