And then there were four. We started Lent Madness 2015 with 32 saints and now you can count the remaining saints on one hand (and still have a thumb left over). Who will win the coveted Golden Halo? Only a few short days and your voting participation will give us the answer. But it’s come down to this: Francis of Assisi, Molly Brant, Brigid of Kildare, and Egeria.

Today we begin the first of two Faithful Four match-ups as Francis of Assisi takes on Molly Brant. Tomorrow, Egeria will face Brigid of Kildare. Then on Spy Wednesday you, Lent Madness voter, will decide who wins the 2015 Golden Halo. (What exactly is “Spy Wednesday?” Thanks for asking. Click here to read all about it).

In this round we ask our Celebrity Bloggers to briefly answer one question: “Why should Saint XX win the Golden Halo?” Today, Laurie Brock (Francis) and Maria Kane (Molly) continue to shepherd these two saintly souls through the 2015 bracket.

Speaking of which, how about a round of applause for our fabulous team of Celebrity Bloggers who toil away in the trenches of Lent Madness without nearly enough recognition? They are truly the backbone of this operation and are worthy of our gratitude. Please do hound them for autographs when you spot them wearing sunglasses and baseball caps just trying to lead normal lives.

To make it to the Faithful Four, Francis defeated John Wycliffe, Cecilia, and Thecla while Molly beat Swithun, Cuthbert, and Bernard Mizeki. (Click on the names of defeated opponents to relive the previous saintly battles and refresh your memory about these two saints). 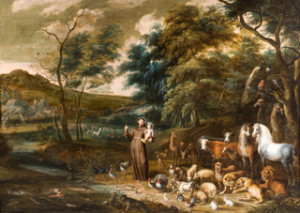 Our church garden is well-used holy space by all of God’s creation. One afternoon in October, members of our church gather with our companion animals and ask God’s blessing on these precious beings of God who share their lives with us.

Over the years, more and more neighbors of many faiths join us, and what began as a small gathering has grown into a lively and sacred time filled with the chorus of barks and meows. Our St. Francis statue, nestled in a corner of the church garden, stands in witness to this holy gathering, reminding us of the man who saw God fully visible in every aspect of holy Creation.

Francis, for his many gifts to the Christian faith, is likely most well-known as the namesake of the Blessing of Animals. I suspect Francis, who spent his life responding to the great generosity of God in all he encountered, would probably offer he was just stating the obvious: that God is present in all that surrounds and sustains us and of course we should offer thanks and prayers.

Francis’ most well-known prayer which he actually wrote, Canticle of Brother Sun, is a song to God who has so deeply entered creation that everything is connected in mystical union. Francis saw everything in creation related to one another and deserving of honor and love. The words remind us that no part of creation is too small or too great, too insignificant or too vast, to stand separate from each other. Brother Sun and Sister Moon are honored. Sister Water, Brother Fire, and Sister Mother Earth are all part of the unity of God. Even Sister Death, “from whom no living man can escape” is praised as part of God’s creative experience. 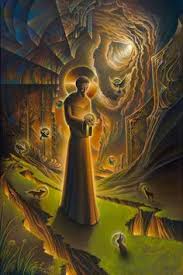 prayer, devotion, service, humility, and peace (granted, Francis’ humility would probably cause him to take the Golden Halo, if he wins, and offer it to Brother Sun or Sister Moon to add to their light). For Francis, love is the medium of Holy Spirit, and expressing love is a reflection of the Holy Spirit alive in our lives. He writes in one of his prayers, “inflamed by the Holy Spirit, may we be able to follow in the footprints of Your beloved Son, our Lord Jesus Christ.”

As we begin Holy Week, we pray that we, too, will walk in the way of the cross, in the footprints of Jesus, and find it the way of life. At the end of Holy Week, we will gather again in our church garden to begin the Great Vigil of Easter. Our song of the Exsultet will celebrate Brother Fire that is the New Fire we pray will burn within our souls; we will praise Sister Death who has been transformed by God and Christ; we will sing with Mother Earth that darkness has been vanquished by our Eternal King.

Our St. Francis statue, nestled in the corner of the church garden, will stand witness to this holy gathering. And in the great chorus of the angels and saints, I pray that we will hear Francis himself join us in our songs and prayers exalting God who has entered creation and filled it with new life. 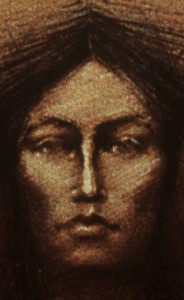 The first time I read Molly Brant’s history, I was immediately struck by her ability to navigate between two vastly different cultures and political systems. As one historian said, she was a “bridge between two worlds.” In the midst of our currently fractured political system, Brant’s life illustrates that there is another way — perhaps not a perfect way — but a means nonetheless of how people of differing cultural and political systems can strive to co-exist in times of uncertainty. Molly’s faithfulness to her Christian faith and her Mohawk family shaped her commitment to harmonious relations even amidst a war that sought to attain the allegiances of Native American tribes no matter the cost to tribal culture and way of life.

Naturally, many debates have circled around Molly’s Loyalist leanings. However, one must remember that history is often on the side of the winner. Were we to step into Molly’s shoes, our view and esteem of her might be a bit different.

Indeed, Molly’s life causes us to examine our own interpretations, leanings, and motivations and how they impact others.

Ultimately, Molly’s goal was to preserve the cultural vitality and independence of Native American tribes. While her displacement 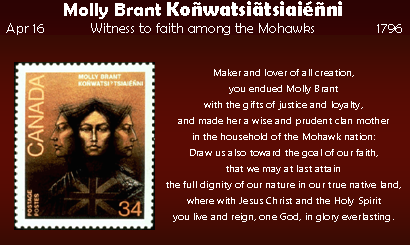 to Canada could have been a cause for her to remain bitter, she instead chose to channel her energy into establishing southern Ontario’s first church.

Upon her death, both her Mohawk community and her British neighbors collectively mourned her death and recognized her outstanding leadership. As one contemporary of Brant recalled, “She was quiet in demeanour, on occcasion, [sic] and possessed of a calm dignity that bespoke a native pride and consciousness of power. She seldom imposed herself into the picture, but no one was in her presence without being aware of her.”

Such is often the case of men and women whose faith shapes not what they say, but how they seek to live their lives in the midst of an imperfect world.

168 Comments to "Francis of Assisi vs. Molly Brant"